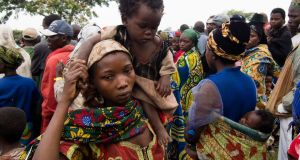 Allegations of corruption in Uganda’s refugee programme led to the discovery that there were 300,000 fewer refugees in the country than previously thought. Photograph: Michele Sibiloni/Getty Images

Germany has followed the UK and Japan in suspending some aid meant for refugees in Uganda, in reaction to what they say is a lack of justice and accountability after last year’s corruption scandal in the African country’s refugee programme.

“What we are particularly disturbed by is that those who seem to be at the centre of this machination have not faced justice,” said German ambassador to Uganda, Albrecht Conze.

He told The Irish Times that €8.1 million of a total commitment of €91.5 million had been withheld. “Maybe it is necessary for the Ugandan government to realise if it’s our money it can’t be swept under the carpet.”

Major allegations of corruption in Uganda’s refugee programme first emerged in February 2018, leading to the discovery there were 300,000 fewer refugees in the country than previously thought.

An audit carried out by the UN’s Office of Internal Oversight Services, published in November last year, found the UN refugee agency, the UNHCR, had wasted tens of millions of dollars in spending on Uganda in 2017 alone. Funds were lost through corruption, improper behaviour around the awarding of major contracts, and overpaying for goods and services.

“With 1.2 million refugees, Uganda remains the largest refugee hosting country in Africa, making donor support absolutely vital,” said Cecile Pouilly, a UNHCR spokeswoman. “While donor trust was understandingly shaken by issues reported last year, UNHCR ... is in constant dialogue with donors to ensure they have all the information and assurance they need from the organisation.”

Mr Conze said the UNHCR had worked to tackle internal problems, and German funding to the agency had now been restored, but the Ugandan government was lagging. Suspects involved in corruption had been identified but nothing had been done, he said.

“Germany has voiced concern ever since the scandal was discovered 15 months ago, and I have now joined my British and Japanese colleagues in making a strong point about the Ugandan government’s commitment – which they have given – in clearing up the mess, in bringing justice to those who have embezzled funds,” he said.

“We expect that there will be a visible effort to take care of the consequences that been promised and have not been delivered.”

In Ugandan refugee camps, refugees have been adding their voices to calls for accountability, saying they suffer the most when funds are misappropriated.

Gratien Zimy Ntezimisi, a Congolese refugee in his 40s who lives in Nakivale settlement, said if donors engaged with refugees directly, corruption would be reduced. “They need to see and hear from the refugees,” he said. “That will help them see how they need to change.”

Mr Ntezimisi says he has suffered retaliation for the past three years, including having his food aid cut off after he reported corruption in 2016. He said refugee whistleblowers needed to be protected. “Things are still the same, they are not improving. That is the sad story. Corruption is affecting all the levels, all the people, all the organisations here.”

The Ugandan government did not respond to a request for comment.

1 ‘I thought it was a hoax’: Patient dies after Texas Covid party
2 White House turns its fire on Anthony Fauci over Covid-19 comments
3 Quarantine process to be tightened as health officials grow nervous
4 Maureen Dowd: Biden has his limitations but he’s no Trump
5 Dirty money: How the Mafia plundered Italy’s public health system
Real news has value SUBSCRIBE