London Letter: Burnham stands up to capital and warns of north being pushed around 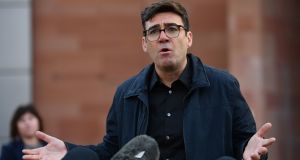 Greater Manchester mayor Andy Burnham: “The culture is still that Westminster holds all the power and all the money.” Photograph: Jacob King/PA

The coronavirus crisis has from the beginning revealed the limits of Westminster’s reach, as devolved governments in Scotland, Wales and Northern Ireland each went their own way in dealing with the pandemic. Wales and Northern Ireland are both under lockdown this week, Scotland has a lighter set of restrictions and England has a three-tier system of regional lockdowns.

This week’s standoff between Boris Johnson and Greater Manchester mayor Andy Burnham, which saw the prime minister impose the tightest restrictions on the city, highlighted how little power even the most high-profile English regional politicians enjoy.

“Perhaps this is a moment where England rose up a little around devolution and the rest of the country. The culture is still that Westminster holds all the power and all the money,” Burnham told Westminster’s business committee on Thursday.

Tony Blair’s devolution of powers to Holyrood and Cardiff in the late 1990s and the Northern Ireland Executive’s establishment by the Belfast Agreement were meant to be followed by regional assemblies in England. But when people in the northeast of England were offered an elected assembly in 2004, they rejected it in a referendum by 78 per cent to 22 per cent.

One of the key figures in the No campaign was Dominic Cummings, who would later run the 2016 Vote Leave campaign and is now Johnson’s chief adviser. Cummings ignored the merits or otherwise of the regional assembly and ran an anti-establishment campaign against more jobs for politicians in an extra layer of bureaucracy in an out of touch system stretching all the way to Brussels.

The referendum defeat was so emphatic that no government has proposed a regional assembly for any part of England and although London has had an assembly since 2000, it has only 25 members and no law-making powers. Over the past decade, a new form of devolution has come to England in the shape of 10 combined local authorities, eight of which have directly elected metro mayors such as Burnham. Mayors like him have oversight powers over such policy areas as policing, housing, transport and health but they depend on central government for funding so their real powers do not match their high profile.

“That kind of intermediate level is incoherent and confused. There is no underpinning, basic consensus about what that level is meant to be achieving,” Richard Wyn Jones, a political scientist at Cardiff University, told Westminster’s public administration and constitutional affairs committee. “Frankly, if you spend any time, as I have recently, looking at the evolution of that kind of intermediate level of governance in England over the last 20 or 25 years, you really have to wrap a wet towel around your head.”

Part of the problem with English devolution is that regional units that make bureaucratic sense are often not aligned with the geography that gives people a sense of place. And Wyn Jones said that too many advocates of regional devolution have presented it as an alternative to more autonomy for England.

Last year’s Conservative manifesto promised more devolution for England and Johnson will need local partners if he is to make good on his promise to “level up” the country’s poorest regions with its richest. But as Burnham told the business committee on Thursday, the coronavirus crisis has exposed how hollow devolution can be unless it involves a real transfer of power from the centre.

“In the UK we have devolution in name but not in reality. Why I found this such a fundamental issue is that the north of England gets pushed around and is told no consistently,” he said.