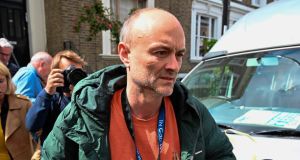 Dominic Cummings leaving his home in London on Sunday following allegations he broke coronavirus lockdown rules by travelling across the England in March. Photograph: Glyn Kirk via Getty

Boris Johnson has refused to sack Dominic Cummings over multiple alleged breaches of lockdown rules, asserting that his chief adviser acted “responsibly, legally, and with integrity” at all times.

The prime minister defended Mr Cummings’s decision to drive 420km from his London home with his wife and their four-year-old son to his parents’ house in Durham in late March.

“I can tell you today I have had extensive face to face conversations with Dominic Cummings, I have concluded that in travelling to find the right kind of care at the moment when both he and his wife were about to be incapacitated by coronavirus, and when he had no alternative, I think he followed the instincts of every father,” he said.

Mr Johnson was speaking at a press conference in Downing Street after 10 Conservative backbenchers called for Mr Cummings to be sacked because his behaviour undermined the government’s public health messaging. Senior cabinet ministers tweeted in support of Mr Cummings on Saturday morning after the Mirror and the Guardian reported that he and his wife travelled to Durham when she was suffering from coronavirus and just before he showed symptoms.

The two newspapers reported on Saturday night that eyewitnesses saw Mr Cummings and his family visiting Barnard Castle near Durham on April 12th, during their 14-day period of self-isolation and that he had returned to Durham from London on April 19th.

With the damage Mr Cummings is doing to the Government’s reputation he must consider his position. Lockdown has had its challenges for everyone. It’s his cavalier “I don’t care; I’m cleverer than you” tone that infuriates people. He is now wounding the PM/Govt & I don’t like that

I totally agree that Dominic Cummings position is untenable. I'm sure he took the decision in the best interests of his family but like every decision we take we also have to take responsibility for those decisions. You cannot advise the nation one thing then do the opposite.

Mr Johnson described some of the allegations as “palpably false” but did not address them directly and Downing Street has not denied that Mr Cummings visited Barnard Castle on April 12th.

“I believe that in every respect he has acted responsibly, and legally, and with integrity, and with the overwhelming aim of stopping the spread of the virus and saving lives,” the prime minister said.

Labour leader Keir Starmer called for an official inquiry into the allegations against Mr Cummings, accusing the prime minister of failing a test of leadership in his response to them.

“It is an insult to sacrifices made by the British people that Boris Johnson has chosen to take no action against Dominic Cummings. The public will be forgiven for thinking there is one rule for the prime minister’s closest adviser and another for the British people. The prime minister’s actions have undermined confidence in his own public health message at this crucial time. Millions were watching for answers and they got nothing. That’s why the cabinet secretary must now launch an urgent inquiry,” he said.

Parliament is in recess until June 2nd but Mr Johnson will face 90 minutes of questions from a cross-party group of leaders of Commons committees on Wednesday afternoon.

“There cannot be one rule for most of us and wriggle room for others. My inbox is rammed with very angry constituents and I do not blame them. They have made difficult sacrifices over the course of the last weeks weeks,” she said.

1 Coronavirus: Two more deaths confirmed amid concern over new clusters
2 Cluster of Covid-19 infections at Kerry ‘house party’ investigated
3 Paschal Donohoe’s victory seen as a revolt against EU’s ‘big four’
4 Reopening of pubs that do not serve food may be delayed beyond July 20th
5 Covid-19: Cases rise in US, India as Australian spike leads to localised lockdown
Real news has value SUBSCRIBE