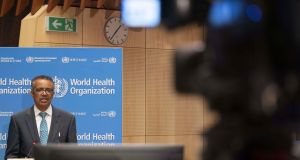 The head of the World Health Organization (WHO) vowed on Tuesday to continue to lead the global fight against the coronavirus pandemic, after US president Donald Trump threatened to cut off funding and to quit the body.

WHO director-general Tedros Adhanom Ghebreyesus defended his agency’s role, after the United States again caused ripples by withholding full support for a resolution on the pandemic.

Washington allowed the resolution calling for a review into the global response to the pandemic to pass by consensus, but announced it was objecting to language about reproductive health rights and permission for poor countries to waive patent rules.

“We want accountability more than anyone,” Mr Tedros told a virtual meeting of the body’s 194 member states. “We will continue providing strategic leadership to co-ordinate the global response” to the pandemic.

But in a statement, Washington said it dissociated itself from language in the resolution on patents and reproductive healthcare.

Paragraphs on the right of poor countries to waive patents to obtain medicine during a health emergency would “send the wrong message to innovators” trying to produce new drugs and vaccines, the US mission in Geneva said in an “explanation of position”.

The reproductive healthcare language could be interpreted as requiring countries to permit abortion: “The United States believes in legal protections for the unborn,” it said.

Even as Mr Trump has proposed quitting the WHO, the body has received backing and a two-year pledge of $2 billion (€1.8 billion) in funds from China’s president Xi Jinping.

During his three years in office, Mr Trump has criticised many international organisations and quit some. Still, European diplomats said they were taken aback by Washington’s decision to stand aside at the WHO while China is boosting its role.

“It was so striking to see Xi Jinping seizing the opportunity to open up, with broad [co-operation], and make a proposal for $2 billion, and say if ever there is a vaccine they will share it with everyone,” a European diplomat said.

“It’s exactly what we feared: the space liberated by Washington will be taken up by China.”

The Geneva-based body declined to comment on Mr Trump’s threat to quit, saying only that it had received a letter from Mr Trump and was considering its contents.

Tuesday’s resolution, sponsored by the European Union, calls for a review into how the novel coronavirus spread after making the jump from animals to humans, believed to have happened in the Chinese city of Wuhan late last year.

On Monday, the WHO said an independent review of the global coronavirus response would begin as soon as possible. “I will initiate such an evaluation at the earliest appropriate moment,” Mr Tedros said on Tuesday.

Diplomats said ultimately Washington had decided not to block it outright, despite its objections.

“There is a strong desire on their part to join consensus,” a Western diplomat said ahead of adoption. Referring to the intellectual property issue in particular, the diplomat added: “If they don’t join, they are isolated, unfortunately. There is really a global consensus on the importance of this.”

The United Kingdom’s death toll from confirmed cases of Covid-19 rose to 35,341 on Tuesday, an increase of 545 on the day, environment minister George Eustice said.

Spain lifted on Tuesday a ban on direct flights and ships from Italy imposed since March 11th to curb the coronavirus, but tourism restrictions and a 14-day quarantine for inbound travellers remained in place.

A much-reduced death rate from Covid-19 has encouraged Spain to begin easing one of Europe’s strictest lockdowns, but the tourism-dependent economy is likely to have to wait until late June to welcome holidaymakers back.

Prime minister Pedro Sanchez is preparing to ask parliament to extend until late June a state of emergency which has helped limit infections but also brought unprecedented restrictions on borders and movement, causing huge economic damage.

Cadena Ser radio reported that cabinet would use a meeting on Tuesday to discuss an extension until June 27. A government spokeswoman did not respond to a request for comment.

At the peak of the outbreak, Spain was losing hundreds of citizens a day as stretched hospitals and care homes struggled to treat patients.

But the overnight death toll reported on Monday was 59, the lowest in two months, bringing the known total to 27,709.

The number of confirmed coronavirus cases in Brazil stands at 255,368, according to Johns Hopkins University figures, making the country the third-worst affected in terms of cases. There are 16,792 officially confirmed deaths in Brazil, which is lower than the UK, Italy, Spain and France.

The death toll in Australia has reached 100, following the death of a 93-year-old woman who had been diagnosed with Covid-19.The woman had been a resident at Newmarch House, the aged care home in western Sydney which has been the site of a cluster of cases.

The number of confirmed cases in India has passed 100,000, currently standing at 100,328 according to Johns Hopkins University figures. The country has recorded 3,156 deaths.

The government this week extended a nationwide lockdown to the end of May, but with significantly reduced restrictions, including allowing markets and standalone shops can reopen from Monday, with social distancing measures. Inter and intra-state road travel resumed with the agreement of states, but air travel, both domestic and international is still banned. - Agencies