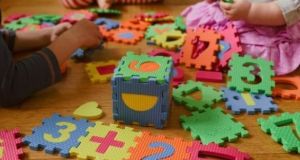 The Government must issue guidelines on how creches can adapt to coronavirus by early next month if the sector has any chance of opening on time, a representative organisation has said.

Early Childhood Ireland (ECI), which represents 3,800 childcare providers, has also said major questions over costs will arise due to potential measures that would fundamentally change how childcare facilities function.

It follows comments by the Minister for Children Katherine Zappone on Wednesday regarding a possible “Norwegian model” to solving a dilemma that means thousands of children are at home with parents often also juggling jobs.

Among potential measures is the adoption of “pod” units limiting child and teacher numbers; staggered opening hours to manage flows; and parents handing children over at their cars rather than walking them inside.

Frances Byrne, director of policy at ECI, said given the considerable challenges posed by the pandemic, clear guidelines on how it should be approached would be needed by early June.

With preschool facilities due to begin phased services by June 29th for children of essential workers and on July 20th for children of all workers, that time period would be key to allowing them adapt to the changes. “This sector is extremely diverse,” she said, “one size fits all won’t do”.

Funding is also of major concern – Scandinavian models like the one referenced by the Minister have already got public financing streams in place, Ms Byrne noted, while parents who reduce the amount of time their children are in settings could not be expected to pay the same level of fees. “The Government needs to be aware someone needs to pay for this.”

As the June 29th deadline approaches, some uncertainty remains around the level of expected demand. Ms Byrne pointed out that many parents will no longer have the need, while others may have varying levels of health concerns due to the virus. Speaking on Newstalk radio on Thursday, Ms Zappone said: “There isn’t going to be the same number of children in childcare facilities as before.”

Nevertheless, the sector is likely to experience considerable demand – last year over 200,000 children used preschool services, according to Pobal.

ECI has described the idea of “pods” in creches as “challenging” – using just one teacher for a number of children may present problems where their attention is required for a task such as bringing a child to the toilet. “Do there need to be ‘floating people’ and what are the health implications of that?” Ms Byrne said.

The pod system is a response to the difficulties posed by getting under-sixes to adhere to social distancing requirements which, it is widely accepted, are not realistic.

Prof Nóirín Hayes of Trinity College Dublin, a psychologist specialising in early education, said Norway spends far greater sums of money on the sector and its system is “really responding to the child and not the virus” .

Norway’s public expenditure on preschool education is over 1 per cent of GDP, whereas Ireland spends less than 0.3 per cent.

Prof Hayes said it was crucial to have three sets of guidelines – one for adults, one for older children and one for those under the age of three.

“We need to give staff the confidence to provide a service that is safe but also developmentally appropriate for this age group,” she said. “They won’t be able to socially distance . . . and they will need to be hugged and touched and lifted.”

As an overall response to young children, disruption should be limited, Prof Hayes stressed – as similar an environment as possible is required and face masks are not appropriate for anybody as expressions are important in early development.