Meat processors face €30,000 fines for each employee whose labour rights are violated 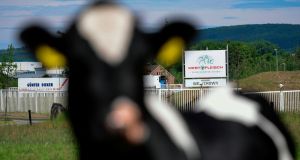 Chancellor Angela Merkel’s cabinet has backed a radical overhaul of Germany’s meat industry after a series of Covid-19 outbreaks in abattoirs around the country.

The far-reaching measures are designed to go far beyond containing the spread of coronavirus. The measures address what critics have for years flagged as cut-throat, industry-wide practices that exploit migrant workers.

“The coronavirus crisis has acted like a magnifying class to highlight what’s already good or bad in a society,” said Hubertus Heil, federal labour minister.

News of more than 600 cases of Covid-19 in abattoirs in several states prompted Mr Heil to force through long-threatened reforms which, among other things, require meat factories to employ staff directly.

Until now, most of the estimated 130,000 workers in about 1,500 plants have been employed largely by contractors and subcontractors. At Germany’s largest meatpacking facility, Tönnies, about half of its 6,500 employees are hired by subcontractors.

Mr Heil, a leading member of the centre-left Social Democrats (SPD), described these “dubious contract structures with subcontractors and sub-sub-subcontractors” as the “root of evil” in the industry, driving down salaries and leaving workers with negligible work rights.

Among the new proposals are €30,000 fines per company for each employee whose labour rights are violated. “The government is resolved to be led not by lobbying interests but by the public good,” he said.

German trade unions estimate that up to 80 per cent of meat industry workers are non-German citizens. News of the Covid-19 cases among Romanian migrant workers prompted that country’s agriculture minister, Violeta Alexandru, to drive to Berlin to meet her German counterpart.

On Tuesday she described the situation of migrant workers in German food production – amounting to about 30,000 people annually – as a perversion of European Union rules on free movement of labour. “These workers should be employed under the same conditions and treated the same all over the EU,” she added.

Germany’s federal agriculture minister, Julia Klöckner, agreed that the time had come for companies to take responsibility for “conditions in the meat industry that are not acceptable”.

A spread of Covid-19 outbreaks in meat plant workers from Poland, Romania and Bulgaria – mostly living in close quarters – has seen a series of unflattering reports in their native countries on the conditions in Germany’s meat industry.

After years of price pressures, profit margins and efficiency targets – driven by demanding, low-cost retailers and price-conscious German customers – the pandemic appears to have shamed Berlin into action.

Meat industry subcontractors, like all German employers, are obliged to pay the minimum wage of €9.35 per hour. Migrant workers report regular miscalculation of their earnings or being charged for work-related expenses such as knife-sharpening. In some cases they are left with about €6 per hour.

Though the meat industry is one of Germany’s most profitable sectors, its VdF industry lobby group has criticised the move towards tighter regulation of its members. “In our view, the working conditions are not primarily to blame for the coronavirus outbreaks,” Heike Harstick, VdF head told the Süddeutsche Zeitung daily.