Conservative leadership and UK prime minister candidate Jeremy Hunt has said he would choose a No Deal Brexit option "with a heavy heart" if a better deal can't be negotiated. Video: Reuters 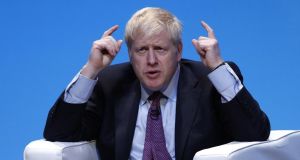 Boris Johnson: The apparent row with his girlfriend, Carrie Symonds, during which she shouted “get off me” and “get out of my flat”, has revived questions about his character. Photograph: Darren Staples/Bloomberg

In Friends, Voters, Countrymen, Boris Johnson’s account of the 2001 general election campaign, he describes how he won the Conservative selection contest in Henley against two more serious, better-informed rivals.

“I had an inkling of the issues: police numbers and Watlington hospital and the cost of housing; but what if they asked me something out of left field, designed to expose my lack of real local knowledge?” he writes.

The left-field question that hit him was about a recording of him offering to give his friend Darius Guppy the address of a journalist Guppy wanted to have beaten up. Johnson dodged and blustered, turning the 500 Conservative activists against the questioner.

“They liked it. At any rate, they seemed to feel that this was an adequate answer, and it may be that this – recovering under fire – was important. Which was a bit of bad luck on the other two, since they lacked the advantage of an embarrassing past to brush aside,” he writes.

Almost 20 years later, Johnson deployed the same technique at the Conservative leadership hustings in Birmingham on Saturday, refusing to answer moderator Iain Dale’s questions about why police were called to his flat early on Friday morning. As Dale persisted and Johnson continued to bluster, the audience turned on the moderator, booing him and shouting him down.

Johnson remains the strong favourite to succeed Theresa May as Conservative leader and prime minister but it is much less of a sure thing today than it was last Friday. The story surrounding the apparent row with his girlfriend, Carrie Symonds, during which she shouted “get off me” and “get out of my flat”, has revived questions about Johnson’s character. And it could get worse in the next few days because, as in the Guppy case, there is a recording of the incident that has not yet been made public.

Johnson’s second problem as he begins a four-week campaign for the votes of 160,000 party members is that foreign secretary Jeremy Hunt, the opponent hand-picked by Team Boris, has got off to a better start than anyone expected.

At Saturday’s hustings, Johnson cheered up the crowd with ebullient oratory about Britain’s prospects after Brexit but he was scant on detail, flinched at tough questions and appeared impatient for the event to be over. Hunt’s opening remarks had none of Johnson’s brio but he answered every question directly and thoughtfully, unambiguous in his backing of HS2, a high-speed rail project that will disrupt many Conservative constituencies and in his support of LGBT rights.

Conservative activists are less familiar with Hunt than with Johnson, so he has more scope to change minds in his favour. And polls showing public hostility towards Johnson on the increase undermine his claim to be the party’s best hope for holding on to power.

Neither candidate has a credible plan for Brexit, with Hunt claiming that a negotiating team including the DUP and hardline Brexiteers will persuade the EU to reopen the withdrawal agreement. But the absurdities and inconsistencies in Johnson’s approach are more apparent and they are already coming under greater scrutiny.

He continues to claim that Gatt XXIV, a World Trade Organisation (WTO) rule, would allow Britain and the EU to enjoy tariff-free access to each other’s markets after a no-deal Brexit. But international trade secretary Liam Fox, who is supporting Hunt, dismissed the claim on Sunday.

“If we leave the European Union without a deal, the EU will apply tariffs to the UK, because you can only have exemptions as described if you already have a trade agreement to go to. And clearly if we leave without a deal, it’s self-evident we don’t have that agreement,” he said.