Maureen Dowd: Trump’s fake toughness pulls US back from brink

Despite claims of displaying weakness, US president called off dangerous strike on Iran 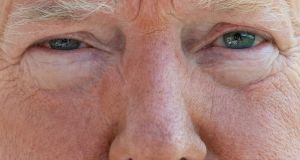 US president Donald Trump: stumbled out of Iran attack just as he stumbled in.“I didn’t like it. I didn’t think it was proportionate.” Photograph: Saul Loeb

As shocking as it is to write this sentence, it must be said: Donald Trump did something right. He finally noticed the abyss once he was right on top of it, calling off a retaliatory strike on Iran after belatedly learning, he said, that 150 people could die.

“I didn’t like it,” Trump told Chuck Todd, a journalist with the US television network NBC. “I didn’t think it was proportionate.”

And thank God – and Allah – that he stumbled out just as he stumbled in. It’s breathtaking that Washington’s conservative foreign-policy mandarins would drag the US back into Mideast quicksand, when we haven’t even had a reckoning about the lies, greed, self-interest and naivete that led US officials to make so many tragic mistakes in the region.

We sweep in with oblivious swagger, with most Americans not knowing the difference between Shias and Sunnis, assuming we’re going to swiftly kick butt in an asymmetrical cakewalk. And then we end up stalemated and playing into our enemies’ hands, with hundreds of thousands dead and a $5.9 trillion (€5.1 trillion) bill for the post-9/11 wars – not to mention that Trumpworld has ended up deeper in the murderous House of Saud’s embrace.

The president blundered into the crisis by cancelling the Iranian nuclear deal, tweet-taunting about the “end of Iran” and hiring the hirsute Iran warmonger John Bolton. And our president is such a mercurial blowhard he could screw it all up again before this column is even published.

I’ve been at this treacherous juncture before with presidents. Once the gears in Washington get going, once the military-industrial complex is “cocked & loaded”, once the hawks around you begin Iago-whispering that if you don’t go forward you’ll be unmanned, it’s awfully hard to reverse course.

Dick Cheney and Donald Rumsfeld steamrollered W into the forever war in Iraq by playing on his fears of being a wimp if he pulled back once the Pentagon had moved troops, carriers, covert agents and B2 bombers into the Persian Gulf. The Saudis told W that Saddam was not sitting on a cache of weapons of mass destruction, and was simply blustering like any Arab despot would, but W dreaded being labelled a wimp, as his father had been in his first presidential campaign.

By Friday morning, Republicans were already painting Trump as a scaredy-cat and Iran as a feral cornered cat. Republican Adam Kinzinger, R-Ill, an Iraq War veteran, told MSNBC that the idea we could now negotiate with Iran “has the potential of inviting a look of weakness”. Cheney came back to haunt us in the form of his dagger-tongued daughter Liz, the Wyoming House member, who said Trump’s inaction “could in fact be a very serious mistake”. She lobbed the nastiest insult she could think of, comparing Trump to Barack Obama.

Even “Fox & Friends”, the Fox network television show which can always be counted on to fluff Trump’s ego, raised doubts. Brian Kilmeade warned: “North Korea’s watching. All our enemies are watching.” But maybe something new could work with the impossible child-man in the White House: positive reinforcement. That was very smart, Mr President, not to tangle with the Persians, who have been engaged in geopolitics since 550 BC, until you have a better sense of exactly what is going on here. Listen to your isolationist instincts and your base, not to batty Bolton. You don’t want to get mired in a war that could spill over to Saudi Arabia and Israel, sparking conflagrations from Afghanistan to Lebanon and beyond.

Just remember: the Iranians are great negotiators with a bad hand and you are a terrible negotiator with a good hand. Trump told Todd that he thought the Iranians shot down a $130 million drone to get his attention because they wanted to talk. (Like when a little kid flicks a paper airplane at your head, but more expensive.) A rare case of Trump’s bloated ego working to our advantage.

It is not hard to imagine Bolton and Mike Pompeo conjuring a North Vietnamese torpedo boat Tonkin spectre, with a drone or US plane buzzing Iranian airspace to provoke Iran to respond, so we can start a war. It’s also not hard to imagine the two uber-hawks doing this without Trump understanding what’s going on. And it’s certainly easy to think that Trump might not be levelling with us about how this went down.

At least, unlike W – another underinformed president – Trump is not a captive of the neocons. He has outside advisers, after all: Fox News anchors. It’s hard to believe that the man standing between us and another world war is Tucker Carlson – a commentator for the US television network Fox. But we must count on Carlson, who, the Daily Beast reported, has been calling Trump directly to counteract Sean Hannity, who has been cheerleading on air for a strike, threatening Iran: “You’re going to get the living crap bombed out of you.”

Carlson is pointing out something that Trump needs to hear: “The very people – in some cases, literally the same people who lured us into the Iraq quagmire 16 years ago – are demanding a new war, this one with Iran.” He compared the warped intelligence Bush officials used to justify the 2003 Iraq invasion with the “misplaced certainty” exhibited by Pompeo over iffy evidence that Iran attacked a pair of oil tankers in the Gulf of Oman.

Carlson also cogently noted that Bolton is goading Trump because, for him, a war with Iran would “be like Christmas, Thanksgiving, his birthday wrapped into one”. Donald “I always attack back ... except 100x more” Trump has always been a faux tough guy. In this case, the faux caused a pause – and that was a good thing.