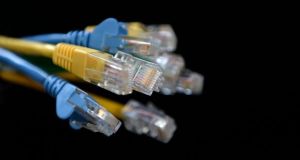 The secretary general of the Department of Communications Mark Griffin told the Public Accounts Committee the department now believes it has a final figure for the cost of the National Broadband project. Photograph: PA Wire

Senior officials from the Department of Communications have moved to reassure TDs that the National Broadband Plan will be different to the national children’s hospital project which ran significantly over-budget.

The secretary general of the Department of Communications Mark Griffin appeared before the Public Accounts Committee to discuss the National Broadband Plan ahead of an expected Government decision on whether to proceed with its roll-out.

Taoiseach Leo Varadkar has already confirmed that the cost of the National Broadband Plan has risen to “many multiples of the original estimate”.

Mr Griffin said the department now believes that it has a final figure for the cost of the project, which will be presented to Government shortly.

He said the subsidy to be provided by the State will be capped, preventing increases to the cost of the project. On the new estimated cost, which has not yet been revealed, Mr Griffin said it was “a change in the cost estimate”.

We haven’t spent money on a build so it is different from the children’s hospital in that respect,” he said.

Officials from the department outlined that there will be monthly, quarterly and annual accounts which will be monitored.

The National Broadband Plan programme director Fergal Mulligan said they would have “full visibility of what they are spending”.

“We will have a substantial team in the department from day one overseeing everything the bidder is doing, what they are spending. They have to prove what they need before they get it.”

The department has also commissioned a cost benefit analysis from PWC as well as a value for money report from KPMG.

There was criticism of the national children’s hospital project that there were too many management structures and boards resulting in a lack of accountability, Fianna Fáil TD Marc McSharry said.

Mr Griffin said the lines of accountability for the National Broadband Plan will be clear.

“This is a process that has been run entirely by the department. We have the leadership role, there is no secondary entity involved at a level below where we can say actually, it is them.

“At some stage in the future I hope to be back before the Public Accounts Committee saying how well it is going but if there is a problem it will be me as accounting officer coming back to explain why, what we have done.”

The Government will be given a “crystal clear” estimate of how much the National Broadband Plan will cost in the coming weeks, the Public Accounts Committee has heard. He said that the Government will shortly be presented with an “optimistic” and “pessimistic” scenario in relation to the plan. Mr Griffin did not directly answer a question about whether he is confident that the project will go ahead. He said the decision to proceed or not is a Government one.

“I can’t say any more than that,” he told the committee. He said it would be “important for us to point out the implications of not proceeding”.

“It will be important for us to do some assessment of what other options might be available if the Government decided not proceed.”

The assessment process will have looked at the option of not proceeding with the plan, he said.