French envoy says EU integration must deepen for it to survive 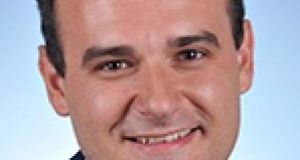 Alexandre Holroyd: “The EU will cease to function if we don’t find a way that citizens are more convinced of its efficiencies. We have to get out of the status quo”

A deepening of European “solidarity” across defence, security, competition policy, taxation, regulation of internet companies and the environment is needed if the European project is to survive, an envoy from French president Emmanuel Macron has told Irish politicians .

Alexandre Holroyd, a French MP who is close to Mr Macron, is one of five “ambassadors” who has been asked to promote the president’s ideas for greater EU integration before May’s European Parliament elections.

He is travelling all over the EU, and was in Dublin this week for a series of meetings, including one with Minister of State for European Affairs Helen McEntee and Fianna Fáil leader Micheál Martin, and he also spoke with The Irish Times.

Mr Macron published his manifesto for the future of Europe in an article in newspapers all over the EU earlier this month. It proposes much deeper integration, including in areas such a defence and security, the protection of elections from interference, economic and fiscal matters, while regulating the internet giants and promoting European companies.

For Mr Holroyd who grew up in London, the Franco-British son of a British businessman and a French speech therapist, the key is understanding the concept of European solidarity as something that extends across all areas of EU co-operation.

“There are some countries that are more concerned by defence solidarity,” he said , citing Finland and Estonia.

“Now if go to southern Europe, it might be the contrary.”

“And if I go here – I mean, Ireland has been the main beneficiary of European solidarity in the Brexit negotiations. At a point of crisis, where Ireland needed Europe to stand behind it, Europe did,

“Solidarity has to be across priorities, otherwise you never achieve anything. Because how do you convince a Finn to support an Italian on financial issues if you don’t say the Italian will support you on defence and security issues? It all comes together.”

Is this a quid pro quo – Europe helps Ireland, but Ireland must also help Europe on issues that it might be uncomfortable with – defence, taxation, and so on?

“And those elements – defence, protection against strategic investments made by non-competitive basis on an unlevel playing field – all of these elements require a European dimension. If not we are simply unable in today’s world to have an impact on their outcome. So there has to be solidarity across those different subjects for us to effectively use it.”

Mr Holroyd argues that unless the EU works better – and deepens its integration – it will not survive. “The world is moving forward, and it’s changing...We have to change the way we approach the world.”

“Anti-European feeling is growing,” he warned. One of the most important member states has decided to leave. “Either we look at it and we don’t do anything about it...or we offer a positive alternative.”

Mr Holroyd understands the resistance to further EU co-operation on tax and defence and other issues. Yet he says the EU must move forward if it is to survive. “The EU will cease to function if we don’t find a way that citizens are more convinced of its efficiencies. We have to get out of the status quo.”