Ugandan president will ‘crush’ protesters ahead of election 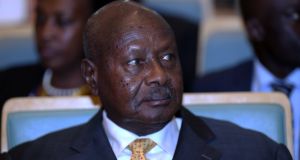 Uganda’s 75-year-old president, Yoweri Museveni, has vowed to “crush” protesters, six months ahead of elections, as he announced that his country’s borders will remain closed indefinitely “because there’s so much chaos in the foreign countries”.

Coronavirus-related restrictions, which include a daily curfew, have hit many Ugandans hard, with millions who were already living hand to mouth struggling to find food.

“I don’t want to hear about selfish people, those are enemies of our future,” Mr Museveni said. “I have been hearing some people saying ‘we shall demonstrate, we will riot’. If you riot we are also here waiting for you, we will deal with you . . . You can plan whatever you plan, we shall crush you.”

The government began to distribute relief food weeks into Uganda’s coronavirus lockdown, though the amount was small and distributions did not stretch far outside capital city, Kampala. Opposition politicians were warned they would be charged with attempted murder if they gave out food separately, in a move the president said was meant to stop crowds gathering.

In May, Mr Museveni posted photographs of himself on Twitter with a weighing scales, saying he had ordered his staff to cook posho – a dough made of maize flour mixed with water – to evaluate how much relief food each Ugandan should eat. He said about 260 grams a day was enough. “The food should not be consumed wastefully,” he wrote.

Mr Museveni has been in power since the 1980s. In 2017, his government introduced constitutional amendments to remove the presidential age limit of 75, 12 years after presidential term limits had been scrapped.

The coronavirus pandemic led Mr Museveni to announce that all campaigning must be done through the media, something opposition candidates say will damage their chances, as many privately owned radio stations support the ruling party. Uganda’s government also introduced a social media tax in 2018, applied to anyone using messaging apps such as WhatsApp or social networks like Twitter or Facebook.

At the beginning of a two-hour-long national address on Tuesday, Mr Museveni played 20 minutes of news reports from countries including the US, Iran, South Africa and Brazil, to show Ugandans devastation the coronavirus pandemic has caused in other places. The speech was his 19th since March, and – as usual – he began half an hour late.

Uganda has more than 1,000 confirmed cases of Covid-19 so far, but just one death. Cases are escalating across the rest of Africa, with more than 770,000 confirmed, over half of them in South Africa. Ugandan borders closed four months ago. Neighbouring Rwanda and Kenya are due to open their international airports in the next week, while Ethiopia has resumed daily flights to Europe.

When Mr Museveni was last re-elected, in 2016, he said he was unwilling to work with opposition who complained about his victory, after a legal challenge to the result was dismissed by Uganda’s Susupreme Ccourt. “If you want to protest, go to your home, or to a playground and do everything you want... but don’t attempt playing in my garden. I can kill you,” he said at the time, according to local media.