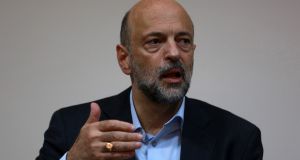 Jordan’s prime minister has said his country could view positively a “one-state democratic solution” to the Israel-Palestine dispute, as he warned that Binyamin Netanyahu’s plans to annex parts of the West Bank could unleash a new wave of extremism in the Middle East.

Omar Razzaz said the Israeli prime minister’s annexation policy would be “ushering in a new apartheid state” that could be a radicalising force and further destabilise the region.

“The way we see it, anything short of a viable two-state solution is going to push not just Jordan, not just Palestine, not just Israel, but the region and the world into chaos,” he said in an interview in Amman.

But in a sign of the ailing status of the decades-old two-state formulation, Mr Razzaz said Jordan could view favourably the creation of a single Palestinian-Israeli state, provided it gave equal rights to both peoples.

Israeli leaders have traditionally eschewed any kind of one-state solution, fearing that the Palestinian population would eventually eclipse the Jewish one and threaten Israel’s religious identity. But the idea has grown in popularity among Palestinian activists as the prospect of establishing their own state has dimmed.

“You close the door to the two-state solution, I could very well look at this positively, if we’re clearly opening the door to a one-state democratic solution,” Mr Razzaz said.

“I challenge anybody from Israel to say yes, let’s end the two-state solution, it’s not viable,” he said. “But let’s work together on a one-state democratic solution. That, I think, we will look at very favourably. But closing one and wishful thinking about the other is just self-deception.”

Mr Razzaz’s comments signal greater openness to a one-state solution than previously expressed by the Jordanian leadership, albeit on a condition that Israel is unlikely to accept in the short term. They also give a possible preview of what Amman and other capitals might push for as a solution to the Israel-Palestine dispute if the annexation goes ahead.

Mr Netanyahu has pledged to “apply sovereignty” to up to 30 per cent of the occupied West Bank, including to Israel settlements and swathes of the Jordan Valley. The annexation plan has been rejected by Palestinian leaders and drawn a wave of criticism from some former Israeli security officials, members of the US Congress, European capitals and British prime minister Boris Johnson.

Led by its ruler King Abdullah II, Jordan has been an active and vocal campaigner against the annexation plan, arguing that it spells the end of the idea of creating an autonomous Palestinian state incorporating the West Bank, Gaza and parts of East Jerusalem.

Jordan views the issue in existential terms, fearing that the death of the two-state solution could open the door to the possibility that it absorbs parts of the West Bank and its population – a popular idea on the Israeli far right that has gradually become more mainstream.

“Jordan will not absorb transfers of Palestinians,” Mr Razzaz said. “Jordan will not become ‘the’ Palestine, as the Israeli extreme right wishes. And Jordan will not give up its custodianship over [holy Muslim and Christian sites in] Jerusalem. These three are clear for us.”

Mr Netanyahu has long opposed a full-fledged Palestinian state. In 2009 he agreed in principle to the possibility of future negotiations that may lead to a “demilitarised Palestinian state”. But since then he has repeated that Israel would always maintain full security control over the West Bank.

Jordan and Israel signed a peace treaty in 1994 in the wake of the Oslo accords that became the foundation for years of failed negotiations for a Palestinian state. The armistice deal is unpopular among Jordanians but has proved durable because of strong security co-operation between the two countries. Its 25th anniversary passed last December without formal commemoration by either side.

King Abdullah has said Jordanian relations with Israel are at a low point and that the annexation plans puts the two countries on a path of “massive conflict”. But he has stopped short of threatening to abrogate the treaty, a move diplomats in Amman and analysts regard as unlikely.

Mr Razzaz claimed annexation would enshrine a South Africa-style apartheid system that was already being practised against Palestinians inside Israel and in the occupied territories.

Mr Razzaz, a Harvard and MIT graduate and former World Bank director, has helped to steer one of the world’s most successful Covid-19 responses, with 11 deaths in Jordan from the virus since the beginning of the outbreak and no current community transmission, according to health officials.

Asked for a response to Mr Razzaz’s remarks, a spokesman for Israel’s foreign ministry said they would not provide comment on the issue. – Guardian