Boris Johnson to make the case for union in Scotland 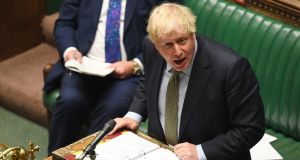 Boris Johnson will use a visit to Scotland on Thursday to argue that the coronavirus crisis has strengthened the case for the union, despite opinion polls showing a majority backing independence.

Promising £50 million (€55 million) in extra funding for Orkney, Shetland and the Western Isles, he will argue that Scotland has been cushioned from the worst economic impact of the pandemic by the actions of the treasury in London.

“The last six months have shown exactly why the historic and heartfelt bond that ties the four nations of our country together is so important and the sheer might of our union has been proven once again,” he said ahead of the visit.

“In Scotland, the UK’s magnificent armed forces have been on the ground doing vital work to support the NHS, from setting up and running mobile testing sites to airlifting critically ill patients to hospitals from some of Scotland’s most remote communities. And the UK treasury stepped in to save the jobs of a third of Scotland’s entire workforce and kept the wolves at bay for tens of thousands of Scottish businesses. More than ever, this shows what we can achieve when we stand together, as one United Kingdom.”

Recent polls have shown a sustained majority for independence among Scottish voters and first minister Nicola Sturgeon has won praise for her handling of the coronavirus pandemic. Polls suggest that her Scottish National Party (SNP) is on course to win a majority in next year’s Holyrood elections on a platform calling for a second independence referendum.

Mr Johnson has said he will refuse any request for a second referendum but the SNP’s leader at Westminster on Wednesday accused the British government of being in panic over the issue.

“Apparently, their great strategy amounts to more UK cabinet ministers coming to Scotland. Can I tell the prime minister that the more Scotland sees of this UK government, the more convinced it is of the need for Scotland’s independence? A far better plan for the Tories would be to listen to the will of the Scottish people,” Ian Blackford said.

Earlier, the Labour Party apologised and paid out a six-figure sum in damages to seven former employees and veteran BBC journalist John Ware over defamatory remarks the party made about their contribution to a Panorama documentary about anti-Semitism in Labour.

The party said it wanted to retract and withdraw statements briefed to journalists after the broadcast alleging that they had an axe to grind against former Labour leader Jeremy Corbyn. Mr Corbyn described the settlement as disappointing.

“Our legal advice was that the party had a strong defence, and the evidence in the leaked Labour report that is now the subject of an NEC inquiry led by Martin Forde QC strengthened concerns about the role played by some of those who took part in the programme. The decision to settle these claims in this way is disappointing, and risks giving credibility to misleading and inaccurate allegations about action taken to tackle anti-Semitism in the Labour party in recent years,” he said.