The House of Commons was suspended for a short period during Dominic Rabb's delivery of the British government's Brexit White Paper, as MPs had not yet received a copy of the document. Video: Parliament TV 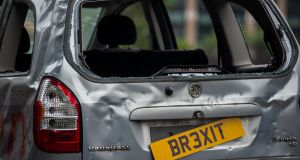 A banged up car decorated with a banner saying “For sale - but no one’s buying May’s Brexit banger” is driven around Parliament Square. The People’s Vote Campaign organised the stunt. Photograph: Getty Images

The British government’s white paper on Brexit adds detail to the proposal agreed at Chequers last week but it does nothing to change the likely response from the European Union or to win over outraged Brexiteers on the Conservative backbenches.

The paper, which runs to almost 100 pages, calls for an association agreement between Britain and the EU, with full regulatory alignment for goods and agri-food, tariff-free trade, a customs arrangement to avoid friction at borders, continued membership of some EU agencies and a close security partnership.

Most of the proposals around customs and single market access have already been published but the white paper adds some detail on migration, opening the door to preferential treatment for EU nationals but only on terms agreed at Westminster. The document is candid about the cost of some of Britain’s choices, acknowledging that single market access will be diminished, particularly for services, which will not remain aligned with EU rules.

The white paper also warns that, although Parliament will be able to reject new EU regulations on goods, doing so would incur serious consequences, as would any breach of the agreement.

“The type of measures that could be imposed for different sorts of breaches would be technical, but could include financial penalties or suspension of specific obligations. The proportionality and duration of such temporary measures should be subject to challenge through independent arbitration. If the offending party failed to comply with the finding of the independent arbitration panel, the only option available to the complaining party would be to suspend parts of the future relationship on a temporary basis,” it says.

The white paper claims that its proposals on customs and regulation would resolve the issue of the Border within the context of the overall relationship between Britain and the EU, ensuring that a backstop would never be used. Theresa May is committed to agreeing the legal text of a backstop with Brussels but the white paper does not change Britain’s policy on the form it should take, or its rejection of measures that apply to Northern Ireland alone.

The immediate response from Europe to the white paper has been positive but EU negotiators will reject the idea of single market access for goods only and dismiss the customs proposal as unworkable. And at Westminster, Conservative Brexiteers lined up to denounce the white paper, which Jacob Rees-Mogg described as representing “the greatest vassalage since King John paid homage to Phillip II at Le Goulet in 1200”.