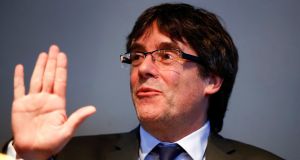 A German court has ruled that exiled former Catalan president Carles Puigdemont can be extradited but, in a blow to the Spanish judiciary, it has decided that he should not face trial for rebellion.

The regional court of Schleswig-Holstein, in northern Germany, decided that Mr Puigdemont is eligible for extradition to face charges of misuse of public funds, for his role in Catalonia’s outlawed independence referendum in October 2017. But it found that there was not enough evidence of use of violence to extradite him on the charge of rebellion, the equivalent of which under German law is high treason.

The misuse of public funds charge carries a maximum jail sentence of 12 years, compared to 25 years for rebellion.

In theory, the decision means Mr Puigdemont will not be able to face trial for rebellion in Spain, although this ruling can be appealed. The extradition is still yet to be ordered by prosecutors.

In a communiqué, the court explained its decision, addressing claims by the Spanish supreme court that pro-independence leaders were responsible for violent scenes during the referendum and the build-up to it.

“The scale of the violence necessary for high treason was not seen during the altercations,” it said.

“Puigdemont only aspired to the celebration of the referendum . . . he did not incite violence.”

Mr Puigdemont fled Spain shortly after the Catalan parliament made a unilateral declaration of independence in October, which was followed by the introduction of direct rule in the region by the Spanish government. He was arrested in Germany in March on a European arrest warrant.

This latest judicial decision did not come as a surprise. The Schleswig-Holstein court had already signalled that it did not intend to extradite Mr Puigdemont on the rebellion charge in April, when it freed the former president on bail.

“We have defeated the main lie maintained by the [Spanish] state,” tweeted Mr Puigdemont, in reference to the accusations of violence.

“It’s great news,” tweeted his successor as Catalan president, Quim Torra, who said that the ruling underlined “once again the deceits and lies of a legal case which should never have been opened”.

But while the Socialist government avoided responding to the ruling, some unionists were critical of the decision. Juan Carlos Girauta, of Ciudadanos, described it as “a despicable act”.

“Instead of moving towards a [common] European judicial space, we are moving backwards towards a European space of impunity,” he said. “The damage the Schleswig-Holstein judges have done goes beyond Spain’s borders.”

The trial of Catalan politicians and rank-and-file leaders for their alleged role in last autumn’s failed independence bid is expected to begin either later this year or in early 2019.