Macron and Merkel challenge US president’s assertion about additional commitment 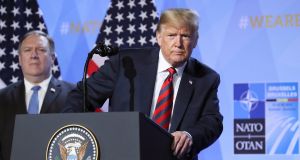 US president Donald Trump and secretary of state Mike Pompeo during a press conference at the Nato summit in Brussels. “There was a great, great spirit coming out of that room” he said of the Nato meeting. Photograph: Christian Bruna/EPA

Donald Trump said fellow Nato leaders on Thursday had agreed to “substantially up” their commitment to defence spending although his assertion was swiftly challenged by his French and German counterparts.

After a series of blistering attacks by the US president on members of the alliance over defence outlays, Mr Trump said there had been “substantial progress” on the second day of the Nato summit in Brussels.

He said leaders agreed to lift their spending to “levels they have never thought of before”.

“The numbers are going up like a rocket ship,” Mr Trump said, hours after he wrote on Twitter that the allies should go further than their spending target of 2 per cent of gross domestic product on defence and should aim to reach 4 per cent.

However, Mr Trump’s comments on spending appeared to be quickly contradicted by French president Emmanuel Macron, who said Nato allies had not agreed to spend more than the existing target.

“There is a communiqué that was published yesterday. It’s very detailed,” he said, according to the Associated Press. “It confirms the goal of 2 per cent by 2024. That’s all.”

Angela Merkel, the German chancellor, acknowledged the need to address the issue, but indicated there had been no additional spending commitment. “We presented the current situation,” she said. “But considering the discussion among the European allies, not only the Americans, I think we need to ask ourselves consistently what more we can do.”

Mr Trump played down suggestions that he had threatened to withdraw the US from Nato, saying the commitment to the decades-old military alliance remained “very strong”. When asked if he believed he could withdraw the US from the alliance without Congressional approval, he said: “I probably can but that’s unnecessary.”

“Presidents have been trying unsuccessfully for years to get Germany and other rich NATO Nations to pay more toward their protection from Russia. They pay only a fraction of their cost. The U.S. pays tens of Billions of Dollars too much to subsidise Europe, and loses Big on Trade!” he wrote on Twitter.

The US president had stunned leaders at the annual Nato summit on Wednesday by saying Germany was “captive” to Moscow because of its Russian gas imports, in televised remarks that he would have known would be widely broadcast.

In early Thursday posts on Twitter, Mr Trump repeated his criticism that Nato was protecting its members from Russia while Germany was paying Moscow “billions of dollars” for gas imports. “Not acceptable!” he wrote.

Nato members had played down tensions on Wednesday but the US president was widely condemned for the way he had attacked Germany in public. At a press conference, Jens Stoltenberg, Nato secretary-general, highlighted some of the issues that the alliance members had agreed. “For a quarter of a century, many of our countries have been cutting billions from their [defence] budgets, now they are adding billions,” he said.

After lambasting Germany on Wednesday morning, Mr Trump later told reporters who were allowed briefly to attend his meeting with German chancellor Angela Merkel that relations between the two countries were “tremendous”.

The US president also reportedly avoided antagonising the other 28 Nato leaders at the official summit dinner on Wednesday evening. According to one European diplomat, Mr Trump was very polite, although some of the guests braced themselves for the US president to erupt at any moment.

The diplomat said “no one wanted to rock the boat” and the other leaders had “massaged” Mr Trump by focusing on questions about his recent summit with North Korea’s leader Kim Jong-un.

Mr Trump held private meetings with the leaders of Azerbaijan, Romania, Ukraine and Georgia, before leaving Brussels for the UK, where he will spend three days before travelling to Helsinki for his first formal summit with Russian President Vladimir Putin. – Copyright The Financial Times Limited 2018