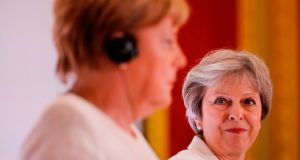 Two vice-chairs of the Conservative Party have quit over the Brexit proposal agreed by Theresa May in Chequers last week, which led to the resignations of two cabinet ministers and three junior ministers.

MPs Ben Bradley and Maria Caulfield were not members of the government but their departure reflects the unhappiness of Brexiteer backbenchers over the plan, which would keep Britain aligned with EU regulations on goods and agricultural products after Brexit.

The prime minister chaired a meeting of her cabinet on Tuesday morning in its new formation, with Jeremy Hunt as foreign secretary and Dominic Raab as Brexit secretary. Brexiteer ministers Michael Gove and Liam Fox confirmed that they continued to support the Chequers plan and would not be following David Davis and Boris Johnson out of government.

In his resignation letter Mr Bradley blamed Ms May’s decision to agree to a Northern Ireland backstop last December for the problems he sees in the Chequers proposal.

“I understand why you perhaps felt you needed to take that decision at the time but it now becomes the barrier to the kind of wide-ranging free trade agreement that many in our party and the country would like to see. It has become a problem rather than a solution, but the Northern Ireland backstop cannot be allowed to become the deciding factor for the whole of the UK’s economy and trade policies,” he wrote.

Earlier, US president Donald Trump spoke of “turmoil” in Britain ahead of his visit to the country on Thursday and praised Mr Johnson. “He’s been very, very nice to me, very supportive. I like Boris Johnson, I’ve always liked him,” he said, adding that he also enjoyed a good relationship with Ms May.

Asked about the comments at a joint press conference with German chancellor Angela Merkel in London, Ms May said: “I’m looking forward to seeing President Trump not only at the Nato summit coming up [in Brussels] in the next couple of days but also obviously when he comes to the United Kingdom at the end of the week.”

Dr Merkel, in London to attend a summit on the western Balkans, welcomed the British government’s new Brexit plan, saying it brought the process “a whole step forward”.

“We will remain Europeans even if we’re not in the same European Union,” she said.

As Brexiteer backbenchers called on the prime minister to change the Chequers plan ahead of the publication of a White Paper on Thursday, home secretary Sajid Javid told MPs that there was no question of maintaining free movement of people from the EU after Brexit. Mr Javid told the Commons home affairs committee that new immigration rules would not give EU nationals an automatic right to work in Britain.

The Chequers plan has divided Brexiteers, with some arguing that it is better to back Ms May’s proposal rather than risk delaying Brexit beyond March 2019. Conservative MEP Daniel Hannan compared the choice to that faced in Ireland during the early years of independence.

“When the Irish Free State left the UK in 1921, there were all sorts of conditions about Treaty ports and oaths of supremacy and residual fiscal payments. And what very quickly became apparent was not just that those things were unenforceable once the split had been realised, it was that everyone in Britain kind of lost interest in enforcing them. And although there were some difficulties along the way in the 1920s, it turned out to have been better to have grabbed what looked like an imperfect independence and then build on it rather than risking the entire process,” he said.