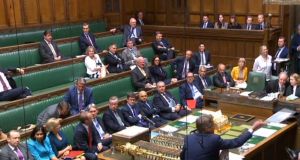 The Government has welcomed the publication of the White Paper on Brexit in London, but has shied away from giving a view on whether it would be acceptable to the EU27 and the Commission’s negotiating team.

In a statement, the Government said it “welcomes the publication of the detailed White Paper on the future EU-UK relationship”. “We will consult with our EU lead negotiator Michel Barnier and his team and our other EU partners.”

It said it hoped the publication of the White Paper “can inject momentum into negotiations and want to see the closest possible relationship between the EU and the UK.

“However,” it warned, “time is running out”.

The statement reiterated that the withdrawal agreement had to contain “a legally operable backstop.”

The Government also said it would intensify its preparations for “all possible outcomes” – code for a hard Brexit.

Speaking privately, one senior Government source struck a more downbeat note, however, questioning whether the paper in its current form could be seen as a “workable or acceptable” solution.

The source also said it was unclear if the paper would break the logjam in talks between the EU and the UK and lead to meaningful negotiations. The tone and content of the debate in London suggested that the UK might resile on some of its proposals in the white paper in response to intense pressure from hard Brexiteers.

Separately, Tánaiste Simon Coveney said the white paper signals a step towards a “much softer Brexit”.

Mr Coveney said he believed it had been a good week for Brexit negotiations despite the “turmoil and difficulty politically in Westminster”.

“We always believed it would be necessary for the British prime minister to stamp her authority to actually get a clear British negotiating position. She’s done that in the last week,” he said.

British Prime Minister Theresa May’s proposals, set out in the long-awaited White Paper, published on Thursday, envisage the creation of a new governing body of ministers from both sides. They will meet twice a year under the plan, including one summit of the British PM with leaders of the remaining 27 member states and heads of EU institutions, to oversee the agreement and discuss proposals for change.

A joint committee would underpin technical and administrative functions, with a “robust” independent arbitration panel to decide on disputes, ensuring that rulings on differences between the UK and EU are not made by the courts of either side.

Crucially, the panel would be able to seek guidance from the European Court of Justice, but only on the interpretation of EU law.

UK courts would pay “due regard” to EU case law only in areas where Britain has agreed to observe a “common rulebook” in areas like trade in goods.

The 98-page White Paper, agreed at a Cabinet summit at Chequers last week which led Boris Johnson and David Davis to quit the British government, outlines UK proposals for what Ms May describes in a foreword as “a principled and practical Brexit that is in our national interest and the UK’s and the EU’s mutual interest”.

Key features of the Future Framework plan include:

- A new free trade area in goods, based on a “common rulebook” of regulations necessary for frictionless movements across borders, which will require the UK to commit by treaty to ongoing harmonisation with EU rules. This is seen by London as a long-term solution to the Irish border issue;

- New arrangements for services, giving the UK freedom to set its own rules and recognising that the UK and EU “will not have current levels of access to each other’s markets”;

- A new system for financial services, which will not replicate the EU’s passporting regime;

- Continued co-operation on energy and transport, a “common rulebook” on state aid and commitments to maintain high standards of environmental and workplace protections;

- “Mobility” rules which will end automatic freedom of movement, but allow UK and EU citizens to travel without visas for tourism and temporary work and enable businesses to move staff between countries;

- A security deal allowing continued UK participation in Europol and Eurojust, “co-ordination” of UK and EU policies on foreign affairs, defence and development, and wider co-operation in areas like cyber-warfare and counter-terrorism;

- Co-operation on the protection of personal data, continued use of the EHIC health insurance card and accords on shared programmes in science, culture, education and space;

- Annual negotiations on access to fishing waters and the sharing of fish stocks.

The paper states: “While what the Government is proposing is ambitious in its breadth and depth, it is also workable and delivers on the referendum result, fully representing the sovereignty of the UK just as it respects the autonomy of the EU.”

It says that the Future Framework agreement must be concluded together with the separate agreement on the UK’s withdrawal, and called for both sides to focus on putting it into effect “as soon as possible”. – PA