The Mexican city where journalism is a life and death matter 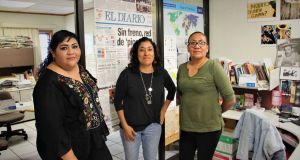 When Gabriela Minjares leaves her desk at the El Diario newspaper every afternoon, the fear of being targeted forces her to vary her route home.

“Three months ago, an audio recording of staff in the local government’s media department was leaked. They were talking about a list of reporters they thought are ‘threatening’. I was on the list,” she says. “After that, I felt exposed.”

A veteran of the crime and investigations beat, Minjares has made plenty of powerful enemies in Juarez, a city of 1.4 million people on Mexico’s border with Texas. Over the years she has exposed corrupt politicians and buried close friends murdered by drug cartels.

Mexico is one of the most dangerous countries in the world for media professionals. Its high rate of unsolved killings means it is ranked sixth in the Global Impunity Index of the Committee to Protect Journalists. Only countries at open war and the Philippines score higher.

That partly explains why all six members of the Ciudad Juarez Journalists’ Network, established by Minjares and her colleagues in 2011, are women. Asked why there are no male members, Minjares shrugs. “I guess we are the bravest, and there is no one else,” she says. “There was a time when 80 per cent of the El Diario staff were women; it’s still around 60-70 per cent today.”

The spark that launched the network was the assassination of Minjares’s El Diario colleague, Armando “El Choco” Rodríguez, who was shot dead while taking his children to school in 2010. “We felt we needed to be better-organised and more aware of the risks,” says Minjares. “We had to become more professional in order to protect ourselves.”

The network holds workshops, and international journalism organisations have helped with digital and physical security training. Day to day, network members call each other before leaving for interviews or on news-gathering trips, and they have stopped venturing out alone after dark.

“But I think that training alone won’t keep us safe. The best way to protect ourselves is to seek justice,” says Sandra Rodríguez Nieto, an award-winning journalist and network member. “If someone comes to me and asks ‘How can I help protect you?’ I’d say: ‘Find the people who killed my friends and colleagues.’ But since that is not going to happen, we have to try protect ourselves.”

Entry to the El Diario building in north-central Juarez is via fingerprint recognition, and an armed security guard mans the rear door, the entry point used by reporters, as it’s deemed safer than the exposed front entrance. Inside, in the editor’s office, photos from the scenes of mass slayings hang on a wall next to a huge map of Juarez.

Minjares points out the city’s most dangerous neighbourhoods, areas controlled by cartels. Nearby Armando Rodríguez’s desk, phone and computer are left untouched. His colleagues say he was one of the most respected journalists in the city, a celebrity among his peers.

“Armando’s case was the first to gain international attention, and it laid clear the vulnerability of Mexican reporters,” says Rodríguez Nieto, a Nieman fellow at Harvard University in 2014. “It was pretty clear that we were really exposed. No one has been charged with Armando’s assassination, and reporters’ bylines on El Diario’s crime stories have been withheld since shortly after his death.

“The reporters killed this year were some of the most visible, internationally recognised journalists in the country. If it can happen to them, to reporters who cannot be accused of being untrustworthy, it can happen to any of us,” she says.

One such victim was Miroslava Breach, a courageous crime reporter until she was shot dead outside her home in Chihuahua, 360km to the south, in March. It was the third killing of a journalist in Mexico that month. Days later, Ciudad Juarez’s Norte newspaper closed, its editor saying that the growing number of attacks on journalists made it too dangerous to stay in print.

So far this year, 11 journalists have been murdered in Mexico, accounting for almost a quarter of all journalist killings globally. In August a journalist was murdered in Veracruz in Mexico’s east while under federal police protection. “In this environment, if somebody kills a reporter, we are completely alone,” says Rodríguez Nieto.

A resurgence of violence in Juarez attributed to the trickling in of new, warring drug gangs and a spike in methamphetamine use has propelled the city back on to international headlines in recent months. Though the rate of killings has fallen significantly from a high of more than 3,700 in 2010, when Juarez was dubbed the murder capital of the world, this year’s homicide rate is expected to double the number in 2015.

As the bodies mount up, holding the authorities accountable for the lawlessness is once again a huge motivation for reporters here.

“We don’t know who killed the 10,000 people that died during the last 10 years,” says Rodríguez Nieto. “[The killers] are still out there, still walking around.”