Dozens hurt as floor of nightclub collapses in Tenerife 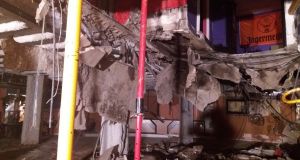 The floor of a nighclub that collapsed early in Adeje, Tenerife. Photograph: AFP

More than 20 people were injured on the island of Tenerife when the floor of a nightclub collapsed and sent clubbers plunging into the basement.

Emergency services in the Canary Islands said that people fell “about one storey” into the basement early on Sunday after a hole of about four sq m opened in the floor of the club in Adeje.

A total of 22 people were hurt and two suffered serious injuries including broken legs and ankles.

Known for its warm climate and beaches, Tenerife is a popular holiday destination for many European tourists.

Along with Spaniards and Britons, authorities say that the injured include two Frenchmen, a Belgian woman and a Romanian man.