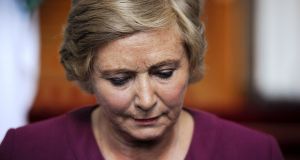 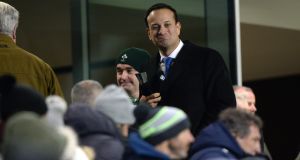 Tánaiste Frances Fitzgerald was not informed of a phone call between Nóirín O’Sullivan and her Department over the adversarial legal strategy towards Maurice McCabe at the the O’Higgins Tribunal.

A spokeswoman for Ms Fitzgerald said today Ms Fitzgerald was not aware of the phone conversation between the then Garda commissioner and a senior official from the Department.

Other senior Government sources were quite categorical in saying that the fact of the call, or its details, were never conveyed to the Tánaiste, who was then minister for justice.

The new information about contacts between the department and the Garda Síochána were disclosed on RTÉ.

The department confirmed to the broadcaster that a senior official in Justice had spoken to Ms O’Sullivan around the same time as the May 2015 email.

The email, written at the of the commission hearings, disclosed that the Garda intended to adopt an adversarial approach which would question the integrity and motivation of Sgt McCabe in taking his complaints against Garda colleagues.

The existence of the email showed that the Tánaiste was made aware of this legal strategy in May 2015 and not in May 2016 as he had previously stated.

For her part, Ms Fitzgerald has said she does not recall the email but had read it. She said it had no significance because the strong legal advice stated in the email was she had “no function relating to the evidence a party in a Commission of Investigation may adduce”.

The department told RTÉ that the conversation had been along the lines of the email, that a legal dispute had arisen in the commission over the strategy being adopted by the legal team for the Garda.

It also confirmed the phone call was made by Ms O’Sullivan to the official.

As further details emerge around the controversy, Taoiseach Leo Varadkar and Fianna Fáil leader Micheál Martin will meet on Sunday night to see if they can reach a solution to the political crisis that has left the State on the brink of a general election.

Following a meeting in a Dublin hotel on Saturday, there have been continuous contacts during Sunday by telephone, between both leaders and their closest officials.

Reliable sources confirmed the meeting will take place in Dublin but would not give a time or location.

A government spokesman earlier said that negotiations were reaching a sensitive phase.

It was investigating allegations made by the whistle-blower of corruption and malpractice within the Garda.

The documents will be distributed to all political parties on Monday, a source said.

The department said in the course of a trawl to find more information it “contacted a former senior official who stated that he recalled the former Garda Commissioner mentioning to him at that time that a legal dispute had arisen.”

“(The conversation) was along the lines of what was set out in the email to the Minister’s private secretary on May 15th 2015. No written record of this call has been located.”

The O’Higgins commission, which reported in May 2016, investigated allegations by Sgt McCabe of inaction, malpractice and corruption in the Cavan-Monaghan Division.

Sources close to both leaders would not divulge if they have been meeting over the weekend face-to-face or talking by telephone.

A spokesman for the Taoiseach said: “The Taoiseach is doing everything he can to avoid an election, and hopes it will be possible to reach agreement with Micheál Martin.

“The talks are at a sensitive stage. stage. There is no question of the Tánaiste being asked to resign,” he said.

Sources on the Fianna Fáil side said engagement was ongoing and that various scenarios would be discussed.

Neither side could foresee any major developments happening on Sunday. A senior Fine Gael Minister predicted the issue could “come down to the wire”, probably late on Monday night.

That is on the eve of the Dáil debate on Fianna Fáil’s motion of no confidence in Ms Fitzgerald. Sinn Féin has a similar motion tabled for Wednesday.

It is understood the Government has rejected a suggestion Ms Fitzgerald stand aside temporarily, or until such time as the the Charleton Tribunal - which is investigation if there was a campaign to discredit Sgt McCabe - deals with this issue.

A number of senior Ministers, speaking privately, said it would be hard for both leaders to step back from the brink and avoid an election.

Minister of State at the Department of Finance Michael D’Arcy said an election could be avoided but it would not be easy.

Speaking on RTÉ’s This Week programme, he also accused Sinn Féin of “political terrorism” because of its “slash and burn” attitude to this controversy.

He said that even if the Tánaiste had full knowledge of the Garda legal strategy, she was disallowed from acting and had been told that by two Attorneys General.

Fianna Fáil TD Thomas Byrne told the same programme that his party was expecting to receive all the documents uncovered by the trawl carried out in the Department of Justice in relation to the Garda’s legal strategy at the O’Higgins commission.

On Saturday, Mr Varadkar gave Mr Martin a four-page summary of what had been found so far.

Ms Fitzgerald will also allow her name go forward to contest the Fine Gael convention for Dublin Mid West which will take place in December. Her former special adviser, William Lavelle, is also expected to seek a nomination. He is a party councillor in the constitency.

Minister for Social Protection Regina Doherty said if an election is called “it will be Fianna Fáil’s fault”.

She was adamant Fine Gael did not want an election and that the Government was going to do everything to find a resolution to “the political brinkmanship between Fianna Fáil and Sinn Féin”.

It would not be right for the Taoiseach “to throw Frances Fitzgerald under the bus”.

However, Opposition parties maintained their stance on the issue.

Fianna Fáil’s jobs spokesman, Dara Calleary, said the issue was that “Frances Fitzgerald did not do her job right.”

Sinn Féin deputy leader Mary Lou McDonald said “the ball is in Leo’s court”, adding the Taoiseach has the option of putting the country first and realising that Ms Fitzgerald was wrong or of putting Fine Gael first.

She said the public needed to know that Ministers could do their job when they take over a portfolio and go into a department and not just be passive.

Independents4Change TD Clare Daly said it would be better to have an election now rather than prolonging the agony and that no one wanted to be blamed for calling an election.

Labour TD Alan Kelly said the Department of Justice’s failure to answer his questions was a scandal and “an affront to democracy.”

He said it was his job to ask questions but the Department of Justice had been “stonewalling” him and blocking him from doing his job.

“This about political accountability. How much did the Department of Justice know and how far up did this knowledge go?

“The Department of Justice is effectively a basket case. It is dangerous to allow them to continue to function like this. They allowed the Taoiseach go into the Dáil chamber of a number of occasions with incorrect information.”

He asked why the current Minister for Justice Charlie Flanagan was “so scared” to answer his questions. “Would Fine Gael prefer to have an election or to tell the truth?”

Speaking on the Newstalk programme On The Record on Sunday, he asked how a government could be formed after a general election, given the behaviour of both parties. He expressed concern that pride is taking precedence over acute issues such as health and housing and the Brexit talks.