Maureen Dowd: My Trump-voting brother Kevin is not tired of winning 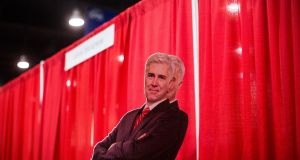 Wherever I go, people ask me the same question: “How can he?” How can my brother Kevin support president Donald Trump? Why isn’t he bothered by all the things others find appalling and frightening? Thanksgiving weekend is here, so it’s time for my Republican brother to share his bounteous harvest of thoughts:

Every time I hear Neil Gorsuch’s name, I smile. It has been a year since Trump was elected, and his thrill-a-minute White House is still causing acid reflux for half the country and all of the mainstream media. There is always a lot of background noise buzzing around the president, and it’s catnip for his detractors.

Full disclosure: I am not a Trump disciple. His manners offend me and the tweeting is overdone, but I do admire his resiliency against an unrelenting and unfair press. His tweeting is annoying, but it can be an effective defence. He has 43.2 million Twitter followers. The New York Times has 3.1 million subscribers.

Trump got into office because of Congress’ inability or unwillingness to do its job. The voters were so fed up, they turned to a reality TV star instead of the 20 politicians on the menu. (Or 20.5 if you want to count Martin O’Malley.) Trump delivered on his promises to shake things up with a slew of executive orders undoing much of Barack Obama’s burdensome regulations and, more important, started to reshape the lower courts decimated by Obama’s appointments. The nomination of Gorsuch to the Supreme Court may be his most lasting legacy.

Trump’s presidency is unorthodox, but his blustering against Kim Jong Un is the only way to deal with a bully. And since Kim will want to get back at Trump, and Kim’s rockets may be able to reach only the west coast, we’re probably all right until he can hit a red state.

Democrats say Obamacare needs only a tweak. My youngest son just received his bill for healthcare. It came with an annual premium of $8,100 (€6,800). At that price, I think he will continue to vote Republican. The dam has broken on sexual harassment and worse. It has already claimed Harvey Weinstein, Kevin Spacey and Charlie Rose and threatens to make a ghost town of Hollywood and the Capitol. It has also brought back Bill Clinton for an unwanted encore of his colourful past.

At the centre of it is the Republican Senate candidate in Alabama, Roy Moore. Moore is despicable. But the seat is very important. He still may win, but it will be a Pyrrhic victory when his own colleagues refuse to seat him and ask the governor to send over a new name. It was not surprising that the president said he would rather have a Republican in the seat. It will not be Moore. Moore will never be seated.

But the Republicans do have a problem. They are in total control and have not passed any major legislation. They cannot let large egos – theirs and Trump’s – get in the way of this opportunity. They are also facing a rear-guard attack by Steve Bannon, who brings his own army of candidates with him. I’m not a Bannon fan. But he’s holding Republicans’ feet to the fire, which should be done.

Their more pressing problem is Hillary Clinton, now in exile on her endless book tour. She continues to hover above the party like some giant pterodactyl of Christmas past.

If Republicans cannot pass tax reform, they are not Republicans and deserve to be fired. They were elected to get results. Early in my sales career, we learned that a new manager was on the way. We quickly called the office where he worked to get a profile on what to expect. The report came back, “Well, he is a real difficult guy to like – but a real easy guy to hate.”

Over the next two years, our office had its highest production in history. The manager was promoted to another sales office. Everyone still hated him. The promotion was for results. Results matter. The Democrats have their own issues. Their leaders are all on Medicare and cling to power like a drunk hugging his bottle of schnapps at last call. Elizabeth Warren and Bernie Sanders want the party to be more liberal, as if that were possible. If they move any further left, they will be driving in Britain.

Their more pressing problem is Hillary Clinton, now in exile on her endless book tour. She continues to hover above the party like some giant pterodactyl of Christmas past.

Here is my holiday list of Things That Do Not Bother Me:

Trump’s daily activity: I do not follow every move he makes. I counsel my Democratic friends to do the same, but they cannot help themselves.

Trump’s minor battles: The NFL players were disrespecting the American flag and were not called out by their gutless commissioner in a timely fashion. LaVar Ball, father of UCLA basketball player LiAngelo Ball, is a publicity whore who cannot grasp that his son (and meal ticket) would have gone to jail without the president’s intervention.

Trump’s interaction with dictators: If Obama had done it, he would have been given the Nobel Peace Prize. (That already happened?)

Robert Mueller’s investigation: So far, no direct connection with Trump himself on the Russia collusion. But it did find collusion with Hillary and the DNC on the dossier. Luckily, she has several donors on Mueller’s staff ready to offer legal advice.

Trump pressuring the Department of Justice: If Jeff Sessions cannot find prosecutable evidence against James Comey, Loretta Lynch and Hillary, he should go back to the Senate.

Nepotism: Ivanka and Jared Trump? Surely you jest. In the grand scheme of things, I don’t think they have any effect on anything. If this were a movie, they wouldn’t even be in the credits.

I hope you had a happy Thanksgiving. – New York Times