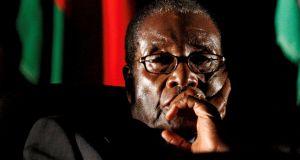 Former Zimbabwean president Robert Mugabe: had told negotiators he wanted to die in Zimbabwe and had no plans to live in exile. Photograph: Mike Hutchings/Reuters

Military authorities in Zimbabwe have agreed to grant the former president Robert Mugabe immunity from prosecution and told him his safety will be protected in his home country, according to a government source.

Mr Mugabe, who ruled the country with an iron grip for 37 years, resigned on Tuesday hours after parliament launched proceedings to impeach him. He had refused to leave office during eight days of uncertainty that began with a military takeover.

Emmerson Mnangagwa, the former vice-president sacked by Mr Mugabe earlier this month, is to be sworn in as president on Friday.

A government source confirmed to Reuters that Mr Mugabe had told negotiators he wanted to die in Zimbabwe and had no plans to live in exile.

“For him it was very important that he be guaranteed security to stay in the country . . . although that will not stop him from travelling abroad when he wants to or has to,” the source said.

“The outgoing president is obviously aware of the public hostility to his wife [Grace], the anger in some circles about the manner in which she conducted herself and approached Zanu-PF party politics,” a second source said.

“In that regard, it became necessary to also assure him that his whole family, including the wife, would be safe and secure.”

“It was very emotional for him and he was forceful about it,” said the source, who was not authorised to speak on the details of the negotiated settlement.

Many in Harare say Mr Mugabe should be allowed to “rest” rather than face charges or enforced exile. Zanu-PF officials told the Guardian that Mr Mugabe and his wife will be allowed to live unmolested.

Ziyambi Ziyambi, a Zanu-PF MP and former minister, said both had been guaranteed immunity from prosecution and other unspecified protections.

“There has been an agreement. They are elder statesmen and will be respected and given their dues. He was our president and he agreed to resign so he will enjoy the benefits of being an ex-president and his wife too. He is our icon,” Mr Ziyambi said.

The generosity of the package will anger many in Zimbabwe, where unemployment is as high as 80 per cent, many live in deep poverty and opposition has been brutally repressed over decades.

Mr Mugabe has always maintained that he leads a frugal life and that he does not possess any wealth or properties outside of Zimbabwe.

But last month a legal quarrel between Grace Mugabe and a Belgian-based businessman over a $1.3 million diamond ring lifted a veil on the wealthy lifestyle of Mr Mugabe and his wife, nicknamed “Gucci Grace” for her reputed dedication to shopping. The family are believed to have an extensive portfolio of luxury homes overseas.

In Zimbabwe, Mr Mugabe runs a dairy business and the family has several farms while local and foreign media have reported that Grace has bought properties and cars worth millions of dollars in South Africa.

Mr Mnangagwa, Zimbabwe’s former vice-president, said on Wednesday that the country was witnessing a “new and unfolding democracy”, as he returned to a jubilant welcome two weeks after fleeing to South Africa following his sacking by Mr Mugabe. – Guardian