New kingpin comes to power after ‘coup’ in eastern Ukraine 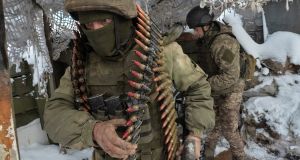 The new regime in Luhansk took power amid a flurry of fatal clashes between Russian-controlled militia and government troops. Photograph: Reuters

The eastern Ukrainian region of Luhansk has a new separatist leader following an armed standoff between local warlords, amid a flurry of fatal clashes between Russian-controlled militia and government troops.

Leonid Pasechnik, a senior security official in the so-called Luhansk People’s Republic (LNR), was appointed as its interim chief on Saturday after erstwhile leader Igor Plotnitsky flew to Russia and resigned “for health reasons”.

Before being spotted arriving at a Moscow airport, Mr Plotnitsky had not been seen publicly since gunmen and armoured vehicles sealed off the centre of Luhansk city last Tuesday, after he sacked local interior minister Igor Kornet.

Armed groups loyal to Mr Kornet were reinforced by a column of troops and armour from the neighbouring “Donetsk People’s Republic” (DNR), and only withdrew from Luhansk once Mr Plotnitsky accepted defeat and departed for Moscow.

Mr Pasechnik said he would lead LNR until elections could be held, and insisted his appointment did not void the 2015 Minsk agreement, a largely moribund peace plan for eastern Ukraine that bears Mr Plotnitsky’s signature.

The power struggle in LNR came to a head shortly after a humiliating moment for Mr Kornet, who was asked by Mr Plotnitsky to leave the luxury house where he has reportedly lived for three years. Local television showed the incident and interviewed the owner of the house, who said she had been illegally evicted.

Analysts said the “coup” was probably sparked by local rivalries and shifting alignments in Russia, where Mr Plotnitsky was seen as a puppet of Kremlin officials and Mr Kornet and Mr Pasechnik are thought to enjoy the backing of the powerful FSB security service.

After Ukraine’s pro-western revolution in 2014, Russia annexed Crimea, fomented a separatist conflict in eastern Ukraine and established LNR and DNR, which are largely lawless areas armed, funded and ultimately controlled by Moscow.

More than 10,000 people have been killed and 1.6 million displaced in the fighting, which has taken on a grinding routine of nightly artillery exchanges and frequent skirmishes between small units of militia and government forces.

The Ukrainian military said on Sunday that two of its soldiers had been killed and two injured over the previous 24 hours. It also revised the death toll given for fighting on Friday, saying that three rather than five soldiers had died that day.

Ukrainian media reported that the army had moved into three small villages in the “grey zone” between government and separatist troops, but the military insisted it was not advancing beyond positions agreed in the Minsk deal.

Ukraine’s president, Petro Poroshenko, returned from Brussels on Friday without a pledge from the European Union to one day make his country a member.

The final statement from the summit between the EU and “eastern partnership” states only went as far as to recognise “the European aspirations and European choice” of the countries involved – Ukraine, Georgia, Moldova, Azerbaijan, Armenia and Belarus.

Mr Poroshenko said the EU had also agreed to look into how Ukraine could join its customs union and single digital and energy markets.