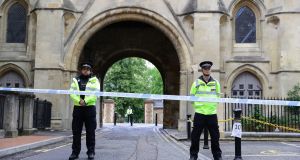 Police guard an entrance to Forbury Gardens on June 21st in Reading, England. A lone attacker targeted groups of people socialising in Forbury Gardens stabbing them in the neck in what police are treating as a terror incident. Photograph: Richard Heathcote/Getty

A “passionate”, “gentle” and “caring” secondary school teacher has become the first victim of the terrorist attack in Reading to be named.

James Furlong was the head of history, government and politics at the Holt school in Wokingham, near Reading. He was one of three people who died after the stabbing attack in Forbury Gardens.

Keith Power, a parent at the school, said he and his family were “distraught” after they received the news in an email from the school this afternoon. Mr Power said that Furlong taught his daughter GCSE history, and praised his teaching, saying her grades soared in his classes.

“Every time I had an interaction with him it was always positive,” Power said. “He was so supportive of my daughter. He just went the extra mile all the time, he was very caring about all the pupils and very passionate about history and teaching and learning, and helping kids. He needs to be remembered as a great human being.

“Living in Wokingham, it’s a very closeted community, you don’t expect people from that community to be involved in a horrific crime. For me, this is even bigger than a terrorist attack, it’s a reflection of how much hatred we have in society.”

In a letter from the school, which has been shared online, co-headteachers Anne Kennedy and Katie Pearce described Furlong as a “very kind and gentle man”, saying he had a “real sense of duty and care for each and every one of our students”.

“He truly inspired everyone he taught about his passion for his subject and his dedication. He was determined that our students would develop a critical awareness of global issues and in doing so, become active citizens and have a voice,” the letter said.

The school said that lessons on Monday would be cancelled for all year groups, with counsellors on site for students and staff to seek support. The local church, St Paul’s church, has also offered to open for children from the Holt school to “light a candle, say a prayer, or talk”, and the school are planning to make a memories book.

“Words cannot describe our shock and sadness at this time. Our thoughts are with his mum, dad, brother and family, and his friends and colleagues,” the email ended.

In a statement issued to the media, the co-headteachers also described Furlong as “wonderfully talented and inspirational”. “He was a cherished colleague and he will be sadly missed,” they said.

The 25-year-old man who was arrested at the scene has been named as Khairi Saadallah, who is understood to be a Libyan national. - Guardian