Podcast: ‘Isis is now considered more deadly than the Taliban’ 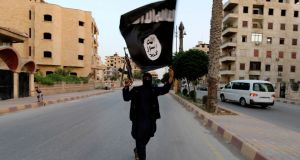 A member loyal to Islamic State waves a flag in Raqqa in 2014. FIle photograph: Reuters

‘World View’ is a weekly foreign affairs podcast from ‘The Irish Times’. Subscribe on Android, on Apple Podcasts, on Stitcher or on Soundcloud.

Is Islamic State really defeated, or “giving up”, as Iraqi prime minister Haider al-Abadi and US president Donald Trump have claimed?

On this week’s World View podcast we talk to Rukmini Callimachi, the New York Times reporter whose coverage of the terror group also known as Isis has brought information about the organisation’s internal operations and characteristics to light.

And Callimachi warns that, although Islamic State’s territory has reduced in size by 98 per cent in Syria and Iraq, “I would not describe the caliphate as having been destroyed or having been lost”. In other places, it is growing in strength.

“In the country of Yemen, not too far away from Iraq and Syria, according to the US Pentagon the number of Isis fighters in the past year has doubled. In Afghanistan, where we’re used to hearing about the Taliban, Isis is now considered more deadly than the Taliban.”

Listen to the podcast

Callimachi has been here before. She was in Mali in 2013, in a region an al-Qaeda-affiliated group had just been driven from. Osama Bin Laden was dead, and western governments were saying the organisation “had been decapitated”.

In a bank once used by al-Qaeda as their local police station, Callimachi found a cache of documents that challenged the prevailing view. “There I was picking up documents signed by the general manager of al-Qaeda giving detailed instructions to the fighters in Mali on exactly how to carry out their jihad.”

“I realised right away that the official narrative was wrong. It was dishonest and it was not in line with what the group was actually doing.”

The discovery changed Callimachi’s perspective on al-Qaeda in other ways. The documents revealed an intriguing internal debate on whether the destruction of a Unesco site in Timbuktu would help or harm its cause.

And today Isis also has internal debates about how it should behave, says Callimachi, especially when its attacks are responsible for the deaths of Sunni Muslims.

“The thing to keep in mind about all of these groups is that they’re being run by by human beings. Do we know of any organisation where people are 100 per cent on the same page?”

For Callimachi’s analysis of the state of Islamic State in 2018, listen to the podcast.