At the stroke of midnight and in the early hours of Tuesday morning (January 9) dozens of same-sex couples exchanged wedding vows across Australia as laws making the nation the 26th in the world to legalise gay marriage took effect. Video: Reuters 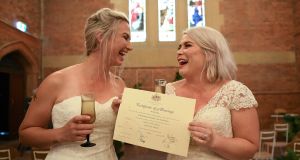 Sarah Turnbull (L) and Rebecca Hickson pose for a photograph with their Certificate of Marriage. Photograph: Dan Himbrechts/EPA

Same-sex couples married in midnight ceremonies across Australia on Tuesday after the country’s last legal impediment to gay marriage expired.

Marriage equality became law on December 9th with overwhelming support in Parliament, but Australia requires that all couples give a month’s notice for weddings.

Athletes Craig Burns and Luke Sullivan married at a midnight ceremony near the east coast city of Tweed Heads.

“It’s another way to show your love and appreciation of your partner in front of the people in your life,” said Mr Burns, a 29-year-old sprinter who will compete in the Commonwealth Games in Australia’s Gold Coast in April.

Ms Hickson described the divisive build-up to a gay marriage ballot preceding parliament’s vote as “a horrible time”. She said the couple wanted to be part of history by becoming one of the first same-sex couples to marry in Australia.

In the west coast city of Perth, Kelly and Sam Pilgrim-Byrne solemnised their 24-year-old relationship in a midnight ceremony on the steps of the Western Australia state legislature.

“It was never anything we considered because it was never anything that was available to us, so we never had those dreams about what would our wedding look like, what would we do, who would we invite, where would it be — we never, ever considered it because we never thought that it would happen in our life time,” Kelly Pilgrim-Byrne told the Australian Broadcasting Corp.

The one-month waiting period was waived for some couples who wed in recent weeks. Those exceptional circumstances included a partner’s terminal illness and overseas-based relatives booking flights to Australia before the official start date for the new law was known.

Civil celebrant Charles Foley has been campaigning for years to get Australia to drop the one-month waiting period, which he said is among the longest in the world.

The federal government imposed it at the request of churches decades ago so parishioners would have time to say why they may object to some religious unions, Foley said.

Ireland has a waiting period of three months.

Australia and Ireland are the only countries that have put the question of legalising gay marriage to a popular vote.

Ireland held a legally binding referendum in 2015 to change its constitution. The referendum found 62 percent of respondents wanted marriage equality.

Australia’s conservative government held a non-binding postal survey to avoid dividing its own politicians and pledged to vote on the issue if Australians endorsed equality. They did, and politicians quickly passed the legislation. –AP