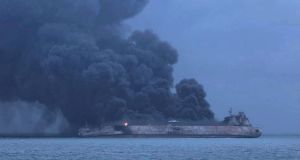 Lashing winds, high waves and toxic gases are hindering dozens of rescue boats struggling to locate missing sailors from a stricken oil tanker in the East China Sea and to extinguish a fire that has burned for the past three days on the ship.

The poor conditions, with strong winds, rain and waves as high as 3 metres (10 feet), frustrated efforts to tame the fire and search for the 31 remaining tanker crew members, the Ministry of Transport said in a statement on Tuesday.

The flames were forcing the South Korean Coast Guard’s search and rescue team to stay as far as 4.8 km (3 miles) away from the tanker, two South Korean officials told Reuters.

The body of a crew member was found on Monday in the water near the tanker, China’s transport ministry said. It had been handed over to the civil affairs bureau.

Concerns were growing that the tanker may explode and sink while a flotilla of 13 search and rescue vessels comb a 900-square-nautical-mile (3,100 sq km) area around the ship for the crew. The tanker hit a freight ship on Saturday night in the East China Sea, burst into flames and has been spilling oil.

The tanker Sanchi, run by Iran’s top oil shipping operator, National Iranian Tanker Co, collided with the CF Crystal, carrying grain from the United States, about 160 nautical miles (300km) off China’s coast near Shanghai and the mouth of the Yangtze River Delta.

The Sanchi was carrying 136,000 tonnes of condensate, an ultra-light crude oil that becomes highly volatile when exposed to air and water, to South Korea.

The size of the oil spill from the ship and the extent of the environmental harm were not known, but the disaster has the potential to be the worst since 1991 when 260,000 tonnes of oil leaked off the Angolan coast.

“We can’t grasp the level of oil contamination at this moment. The cargo is still on fire, so it is hard to figure out if oil is being spilled,” Park Sung-dong, an official from South Korea’s Ministry of Oceans and Fisheries, told Reuters.

Chinese state media CCTV showed footage on Monday of boats dousing the flames with water as plumes of thick dark smoke continued to billow from the tanker.

The crew of the Sanchi are all Iranian nationals except for two Bangladeshi citizens.

Fishermen to the rescue

The CF Crystal suffered limited damage and the 21 crew members, all Chinese nationals, were rescued by a passing fishing trawler on Saturday night, according to a report posted by state-owned Xinhua News to its Twitter account on Tuesday.

“The fire was so fierce. It kept exploding like bombs. So loud,” said Zhu Tingwen, a sailor on the fishing boat, amid footage that showed the sailors on the freighter being transferred to a rescue vessel.

The trawler from Zhejiang province scoured for survivors on the tanker, but could not get close enough because of the fire, Xinhua said.

“Anyone will go for a rescue in this case,” said the fishing boat captain Zheng Lei. “It just happened to be me.”

The freighter has been taken to a port near Shanghai where investigators will start work on assessing the cause of the disaster, the government said.

China’s transport ministry warned that toxic gas from the tanker was harmful to the rescue workers and that protective clothing and gas testing equipment was being dispatched to the emergency teams.

When condensate meets water, it evaporates quickly and can cause a large-scale explosion as it reacts with air and turns into a flammable gas, the ministry said on Monday.

Trying to contain a spill of condensate, which is extremely low in density, highly toxic and much more explosive than normal crude oil, may be difficult. –Reuters

China coronavirus death toll reaches 26 as cities locked down 16:39
Doctors give all clear for 14 people tested for coronavirus in UK 16:38
Tens of thousands march in Baghdad to demand US expulsion 14:51
Six killed, several injured in shooting in Germany, police say 14:38
Trump swept up by ‘bogus’ Ukraine theory, impeachment trial told 10:18