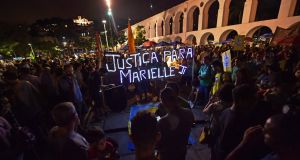 Illegal militias in Rio de Janeiro linked to rogue police officers and politicians are suspects in the murder last month of Rio city council member Marielle Franco and her driver, according to Brazil’s public security minister.

“The investigations advance and are narrowing down possibilities. One of them is that the crime is linked to militias,” the minister, Raul Jungmann, said at an event on Monday. He refused to elaborate and directed further inquiries to police investigators.

But police chief Rivaldo Barbosa said he would make no comment on the case until the end of the investigation. Meeting with the families of Ms Franco and Anderson Gomes after the minister’s comments, he described the case as a “complex” one that would require more time to resolve.

Ms Franco was shot four times in the head on March 14th by someone travelling in a car which pulled alongside the one she was in. Nine bullets were fired, three of which hit Mr Gomes, who also died. Ms Franco’s assistant escaped with minor injuries.

Forensic examinations indicate the bullets used were part of a federal police consignment stolen in 2006. Some of these stolen bullets were used in a 2015 massacre of 17 people by police officers in greater São Paulo, leading to speculation of police involvement in Ms Franco’s murder.

Illegal militias emerged as a major new force in Rio’s criminal underworld after the turn of the millennium. Comprising serving and retired police officers and firemen they proclaimed their goal was to chase out the drug gangs that dominated poor communities.

Initially the groups were welcomed by many residents tired of living under the control of heavily armed drug traffickers and were able to raise money to fund their activities from local businesses.

But having established their own control, especially in the sprawl of poor communities in the west of the city, they moved into lucrative rackets such as providing clandestine local transport, distributing gas canisters and illegal television and internet connections.

Areas under militia control are notorious for the disappearance of petty criminals and people who cross the groups.

Ms Franco participated in a state assembly investigation into the militias in 2008 which exposed the rising power of the groups and their links to local politicians.

Several crackdowns on the groups, which have led to the imprisonment of elected officials and serving police officers, have changed the profile of militias in recent years with former police officers, often fired from service for irregularities, increasingly prominent.

But public security experts say the groups still have close contacts within the police, pointing out that police operations are far less frequent in neighbourhoods under militia control compared with those dominated by drug gangs.