May insists that seeking parliament approval would have compromised military operation 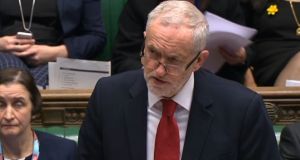 Labour leader Jeremy Corbyn during the second debate on the Syrian air strikes in the House of Commons. “It is for this House to take matters into its own hands.” Photograph: PA Wire

Jeremy Corbyn has called on MPs to assert their authority over British military action after Theresa May’s government failed to consult parliament ahead of last weekend’s air strikes against Syria.

Opening a debate on parliament’s role in authorising such action, the Labour Party leader said Britain needed a War Powers Act similar to the requirement in the United States that vests Congress with the power to declare war.

He said the prime minister had abandoned the convention under which her predecessors have sought the approval of parliament before every military action since the Iraq war in 2003.

“It is for this House to take matters into its own hands and to take back control – as some might put it. I am clear that, as an absolute minimum, parliament should have enshrined in law the opportunity to ask the following questions before the government can order planned military action: is it necessary; is it legal; what will it achieve; and what is the long-term strategy?” he said.

“It is difficult to argue that requiring governments to answer those questions over matters of life and death would be anything other than a positive step. There is no more serious issue than sending our armed forces to war. It is right that parliament has the power to support, or to stop, the government taking planned military action.”

Ms May said her government respected the convention under which MPs should have a say before troops are deployed overseas, but pointed to a statement from former defence secretary Michael Fallon in 2016 outlining an exception to the convention, when consulting MPs in advance could endanger an operation. She said that, in the case of Saturday’s air strikes, a debate in parliament could have given Bashar al-Assad’s air defence commanders vital clues about the targets, which would have allowed them to concentrate their anti-aircraft defences in particular places and make them more effective.

“Our ability to exploit uncertainty was a critical part of the operation, and that uncertainty was also a critical part of its success. We know that the Syrian regime was not aware in advance of our detailed plans. If I had come here to the House to make the case for action in advance, I could not have concealed our plans and retained that uncertainty. I would quite understandably have faced questions about the legality of our action,” she said.

“The only way I could have reassured the House would have been to set out in advance – as I did yesterday after the event – the limited, targeted and proportionate nature of our proposed action. I would have faced questions about what aircraft and weapons we were planning to use, when the operation was going to take place, how long it was going to last and what we were going to do.”

Mr Corbyn called on MPs to reject the motion “that this House has considered parliament’s rights in relation to the approval of military action by British forces overseas”. But it was carried by 317 votes to 256, with the Conservatives and the DUP voting in favour and everyone else voting against.