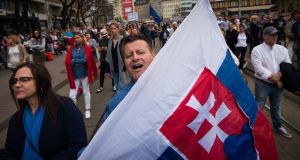 Slovakia’s police chief Tibor Gaspar is to step down, handing a victory to protesters who have demanded his resignation since the still unsolved murder of investigative reporter Jan Kuciak and his girlfriend in February.

The killings and their possible link to alleged mafia figures with powerful political connections in Slovakia triggered a crisis that brought down prime minister Robert Fico and interior minister Robert Kalinak, but Mr Gaspar clung to his post.

Tomas Drucker, Mr Kalinak’s successor, resigned on Monday over what he called his failure to calm public disapproval of Mr Gaspar. But he also insisted that he saw no reason for the police chief’s removal.

Slovakia’s new prime minister, Peter Pellegrini, bowed to mounting pressure on Tuesday however, and announced that Mr Gaspar would be replaced at the end of May.

Mr Pellegrini said he had agreed with Mr Gaspar “that in view of the current situation and recognising the need to stabilise the situation and ease tension, and to relieve the police of constant media pressure and questions about its activity, he will leave the post of police chief”.

Civil society groups that have been at the forefront of major street protests since the double murder say Mr Gaspar – a close ally of Mr Fico, Mr Kalinak and other leaders of the ruling Smer party – could not be trusted to lead an impartial investigation into the killings and the apparent corruption discovered by Mr Kuciak.

In his last investigation, which was published after his death, Mr Kuciak revealed links between political figures close to Mr Fico and Italian businessmen in Slovakia who are allegedly part of the Calabria-based Ndrangheta crime group.

All those named by Mr Kuciak deny those claims and any involvement in his death. He and his girlfriend, who were both 27, were found shot dead at his home on February 25th; no one has been charged in the case.

Protest groups and opposition parties asked why Mr Gaspar had to remain in office for another six weeks, when Mr Fico as premier and two interior ministers had left office immediately after resigning.

“We will follow Mr Gaspar’s steps very closely until the last moment,” said leaders of a protest movement called “For a Decent Slovakia”.

“All those decent people who care about Slovakia can be proud of themselves. Their pressure has brought about the resignation of Mr Fico, Mr Kalinak, Mr Drucker . . . and [police] president Gaspar,” they added.

“We believe that the thousands of decent police officers, whose work we value, will have a new police president about whom the public will have no doubts.”

Slovak president Andrej Kiska said “the government must finally start working” and called it “absurd” that debate over Mr Gaspar’s future had lasted so long.