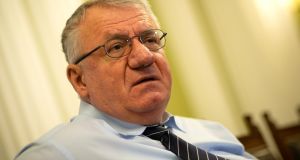 Vojislav Seselj: “I am proud of all my war crimes and crimes against humanity and am ready to repeat them.” File photograph: Andrej Isakovic/AFP/Getty Images

A UN war crimes court on Wednesday overturned an acquittal of Serbian politician Vojislav Seselj on charges of persecution and inhumane acts – but the ultra-nationalist said he remained proud of what he did.

Judges in The Hague sentenced Seselj to 10 years on charges including deportation, but since he spent 12 years in pre-trial detention the penalty was considered already served. He was given permission in 2014 to return to Serbia for cancer treatment.

“I am proud of all my war crimes and crimes against humanity and am ready to repeat them,” Seselj told Reuters by telephone from Serbia, saying the fresh verdict is not valid and the appeals court should only have had the power to order a retrial.

Seselj (63) said he still wanted a Greater Serbia uniting all parts of Serbia, Bosnia and Croatia where Serbs live.

Seselj founded the Serbian Radical Party and was deputy prime minister under Slobodan Milosevic during the wars that accompanied the break-up of Yugoslavia in the early 1990s in which more than 100,000 people were killed.

The case is one of the last to come before the International Criminal Tribunal for the former Yugoslavia (ITCY), set up to prosecute major crimes resulting from the wars, which closed last year.

The court acquitted Seselj in 2016 of charges including murder for stoking ethnic hatred at the start of the conflicts. However, appeal judges in a special chamber handling outstanding ICTY cases ruled that Seselj was criminally responsible because of a speech he gave in Hrtkovci, Serbia, in May 1992, for “instigating deportation (and) persecution . . . as crimes against humanity”.

Prosecutors had called on the judges to reverse the acquittal or order a retrial. The appeals chamber did not find a strong enough link between Seselj and other members of an alleged joint criminal enterprise to drive non-Serbs from parts of Croatia and Bosnia.

“The initial verdict could have not been turned into conviction. The appeals court could have ordered retrial only,” he said.

Serbian anti-war organisation Women in Black said the verdict gave partial satisfaction to families of victims. “Fighting hate speech and facing the past is a precondition for progress in Serbia and the region,” it said in a statement. – Reuters