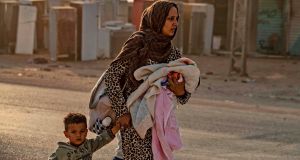 A woman flees with her children amid Turkish bombardment on Syria’s northeastern town of Ras al-Ayn in the Hasakeh province along the Turkish border. Photograph: Delil Souleiman

Turkey began its promised military incursion into northeast Syria on Wednesday as US president Donald Trump defended his decision to withdraw US troops from the region, which paved the way for the assault.

Announcing the operation, code-named Peace Spring, President Recep Tayyip Erdogan said Turkey’s mission was to “prevent the creation of a terror corridor across our southern border, and to bring peace to the area”.

Mr Erdogan, who spoke by phone to Russian president Vladimir Putin before the invasion, wants to establish what he terms a “safe zone” along Syria’s border with Turkey. It is expected the Turkish military may ultimately lay siege to the border towns of Kobani, Tal Abyad and Ras al-Ayn.

The offensive began after Mr Trump ordered the withdrawal of the 1,000 or so US troops stationed in the region following a phone call with Mr Erdogan on Sunday.

US forces had been fighting alongside the Kurdish-dominated Syria Democratic Forces (SDF) in the area to defeat Islamic State (Isis), but Turkey perceives the SDF as close to the Kurdistan Workers’ Party (PKK), a militant group fighting an insurgency against the Turkish state.

Mr Trump, under mounting pressure from Democrats and Republicans over his decision to effectively abandon America’s Kurdish allies, defended his decision.

Speaking at an event in the White House, the US president said he was “doing the right thing”. “We’ve been there for many, many years, and it’s time to get out,” he said. Noting that the Kurds were “fighting for their land”, he said: “They didn’t help us in the second World War, they didn’t help us with Normandy.” He added: “With all of that being said, we like the Kurds.”

Several Republicans – many of whom are backing the president in the ongoing impeachment inquiry – strongly criticised the US move, with the Republican-controlled Senate bringing forward a bill proposing sanctions on Turkey.

“Pray for our Kurdish allies who have been shamelessly abandoned by the Trump administration,” tweeted Senator Lindsey Graham. “This move ensures the re-emergence of Isis.”

“Impossible to understand why @realDonaldTrump is leaving America’s allies to be slaughtered and enabling the return of Isis,” she tweeted.

Ireland was among the countries to condemn the attack, with Minister for Foreign Affairs Simon Coveney urging Turkey to “refrain from this action”.