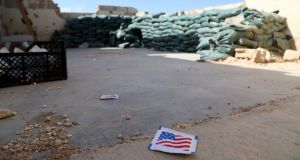 The Tal Arqam base in Ras al-Ein, northern Syria, lies deserted after the withdrawal of US forces. Photograph: EPA

Not for the first time, the impetuous nature of US president Donald Trump’s foreign policymaking has taken the world by surprise.

On Sunday, following a telephone conversation with Turkish prime minister Recep Tayyip Erdogan, he announced that the US would withdraw its troops from northern Syria, shocking Trump’s allies at home as well as key US allies in the region.

The withdrawal of US troops paved the way for Wednesday’s Turkish incursion into areas of Syria which are controlled by Kurdish forces with which the US has been closely allied in the fight against Islamic State since 2015 but which are viewed with deep hostility by the government in Ankara.

The key Kurdish actors in Syria are the People’s Protection Units or YPG, the dominant element in an alliance of Kurdish and Arab militias known as the Syrian Democratic Forces (SDF), and the military wing of the Kurdish Democratic Union Party (PYD).

Over the course of eight years of civil war in Syria, Kurdish forces have captured tens of thousands of square miles of territory in the northeast of the country, close to the Turkish border.

In so doing, they have established a de facto autonomous region, sometimes referred to as Rojava, which is home to significant Kurdish, Arab and Assyrian populations.

The YPG has borne the brunt of the campaign against Islamic State in Syria. It played a major role in the August 2014 evacuation to safety of 50,000 Yezidis threatened by an Islamic State campaign regarded as genocidal by the United Nations, and in the recapture of Raqqa, the one-time capital of the Islamic State caliphate, in October 2017.

The plan could work only if the existing Kurdish population is removed and relocated, which would be both morally repugnant and impossible to pursue peacefully

In all, the YPG suffered losses of up to 11,000 fighters in the conflict. However, regardless of its role in the fight against Islamic State, for Turkey, the YPG is no more than an extension of the Kurdistan Worker’s Party (PKK), which has fought an often violent campaign for Kurdish autonomy in Turkey since 1984, and is designated as a terrorist group by both the United States and the European Union.

Erdogan has been threatening a Turkish assault on the Kurdish-controlled territories for some time. Last December, Trump and Erdogan discussed the latter’s threat to launch a military operation.

Instead of holding the official US line of opposition to such a move, Trump took Erdogan’s side and announced that the US would withdraw its troops from Syria, although he partially reversed that decision afterwards.

In his speech to the UN last month, Erdogan proposed the establishment of a ‘safe zone’ in northern Syria in which millions of Syrian refugees currently hosted by Turkey could be resettled. On the face of it, such a proposal might be attractive to an EU fearful of the resumed flow of Syrian refugees to the continent.

It might also prove electorally attractive to a domestic audience within Turkey which has been growing disenchanted with Erdogan’s ruling Party of Justice and Development.

However, some are deeply sceptical of the plan. The former US envoy for Syria, Brett McGurk, described it as little more than a plan to extend Turkey’s border 20 miles into Syria while former EU ambassador to Syria Marc Pierini argued that the idea, as suggested by Erdogan, that more than two million people could be moved to northeastern Syria “made no sense”.

For the Kurds, paradoxically, it may be that they are left with little choice over the longer term but to turn to the Assad regime

Indeed, the plan could work only if the existing Kurdish population is removed and relocated, which would be both morally repugnant and impossible to pursue peacefully.

Any unco-ordinated US withdrawal has the potential to lead to a military free-for-all in which SDF, Turkish and Syrian troops become involved with potentially disastrous humanitarian consequences. The attack by Turkey clearly threatens not only the SDF, which has made it clear that it will respond by whatever means are necessary, but also hundreds of thousands of Kurdish and other civilians.

The situation is further complicated by the fact that Kurdish forces are currently guarding 11,000 Islamic State prisoners, including some 2,000 foreign fighters. There are another 70,000 people in al-Hawl refugee camp, which has been described as an incubator for the re-emergence of Islamic State.

The White House claims that Turkey has undertaken to assume responsibility for Islamic State prisoners currently under Kurdish control. However, quite how an orderly handover would take place from Kurdish guards to Turkish forces who may be attacking them is not quite clear.

In any early indication of its priorities, the SDF announced on Monday that it was transferring some fighters, who are currently guarding Islamic State captives, to the Syrian-Turkish border.

Therefore, it is not surprising that fears have been expressed on all sides that the volatility that will issue from a sudden US withdrawal may create the conditions for Islamic State to regroup and threaten stability in the region once more.

For Trump, the unexpected policy about-turn may reflect a doubling down on his repeated commitment to end US involvement in “ridiculous” endless wars abroad, as he has tweeted. However, he faces significant antipathy to his move to abandon the Kurdish allies of the US.

On Monday, a spokesperson for the US department of defence repeated its opposition to any Turkish operation in northern Syria, while Trump’s own secretary of defence, Mark Esper, committed the US to working with its Nato allies to reiterate the possible “destabilising consequences” of its potential actions for Turkey, the region and beyond. Republican senator Lindsey Graham, a Trump ally, has raised the possibility of sanctions on Turkey if it attacks the Kurds.

For the Kurds, paradoxically, it may be that they are left with little choice over the longer term but to turn to the Assad regime. For Damascus, a deal on some form of self-government for the region might be preferable to losing effective control over more of its territory to Turkey.

In any case, many Kurds will feel abandoned by western allies yet again. They lost out on their dreams of independent statehood in the remaking of the Middle East that followed the end of the first World War.

Decades later, having joined an uprising against the brutal regime of Saddam Hussein in Iraq, with the overt encouragement of the US, they saw their aspirations for freedom crushed as Saddam used helicopter gunships, with the tacit approval of US forces, to put down the rebellion. Thus Trump’s betrayal of his Kurdish allies follows a long and dishonourable pattern of western duplicity in the region.