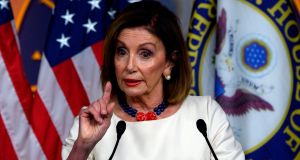 US House of Representatives speaker Nancy Pelosi has told Donald Trump he will be held accountable in spite of White House decision not to co-operate with impeachment inquiry into the president. Photograph: Andrew Caballero-Reynolds/AFP via Getty Images

House speaker Nancy Pelosi has warned US president Donald Trump that he is “not above the law” after the White House sent a blistering letter to Congress declaring it would not co-operate with the impeachment inquiry.

The eight-page later written by White House lawyer Pat Cipollone claimed that the impeachment inquiry launched by Ms Pelosi last month was an attempt to “overturn the results of the 2016 election and deprive the American people of the President they have freely chosen”.

It claims that the president has been denied the opportunity to cross-examine witnesses, receive transcripts of testimony and “other basic rights guaranteed to all Americans”.

“Many Democrats now apparently view impeachment not only as a means to undo the democratic results of the last election, but as a strategy to influence the next election, which is barely more than a year away,” it states.

The letter, which was addressed to Ms Pelosi and the chairs of the House intelligence, judiciary and oversight committees, asserts that the released summary of the call between Mr Trump and Ukrainian president Volodymyr Zelenskiy on July 25th, in which Mr Trump asked Mr Zelenskiy to investigate his Democratic rival Joe Biden, “established that the call was completely appropriate and that there is no basis for your inquiry”.

It also notes that a formal impeachment vote has not yet taken place on the House floor.

.@realDonaldTrump, you are not above the law. You will be held accountable. #TruthExposed https://t.co/elMCHdLYlK

It concludes: “In order to fulfill his duties to the American people, the Constitution, the Executive Branch, and all future occupants of the Office of the Presidency, President Trump and his Administration cannot participate in your partisan and unconstitutional inquiry under these circumstances.”

In a response to the letter, Ms Pelosi warned that “continued efforts to hide the truth of the president’s abuse of power from the American people will be regarded as further evidence of obstruction”.

Democrats launched the impeachment inquiry last month after details of the call between Mr Trump and Mr Zelenskiy emerged. A whistleblower complaint also alleges that there was an effort by White House officials to conceal details of the call amid concerns about the president’s instructions to the Ukrainian leader.

Mr Trump again lambasted the whistleblower on Twitter on Wednesday. Describing the call between himself and Mr Zelenskiy as “very congenial, a perfect call”, he wrote: “The Whistleblower and others spoke BEFORE seeing the Transcript. Now they must apologize to me and stop this ridiculous impeachment!”

He also renewed his attacks on Adam Schiff, the chairman of the House intelligence committee. “Adam Schiff is a disgrace to our Country!” he tweeted.

Some senior Republicans came out in defence of Mr Trump on Wednesday. Senator Lindsey Graham said again that he did not believe that the summary of the phone call was “an impeachable offence”.

Rudy Giuliani, the president’s personal lawyer, said that he would “love” to testify to Congress, but that he had to consult with his client, Mr Trump.

America’s former ambassador to Ukraine, Marie Yovanovitch, who was recalled early from her post by the state department earlier this year, is due to testify to three House committees on Friday, but it is unclear if she will do so.

The US ambassador to the European Union, Gordon Sondland, was blocked by the White House from testifying as planned on Tuesday, despite having flown from Brussels to Washington to do so.