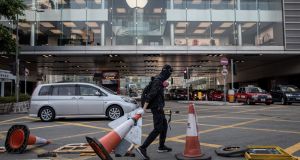 A pro-democracy protester blocks a road outside the Apple store in Hong Kong during clashes with police. Photograph: Chris McGrath/Getty

Apple was heavily criticised by Chinese state-run media on Wednesday for making a “poisonous” smartphone app available that allows Hong Kong activists to report and track police movements in real-time.

HKmap.live relies on crowdsourced information to track police locations, alerting users to the movement of police vehicles, the use of tear gas, the presence and number of armed officers, clashes that have resulted in injuries and arrests, and other details that are added to a regularly updated map.

“Does this mean Apple intends to be a guide for the rioters?” the paper asked. “This recklessness will cause a lot of trouble for Apple . . . and is a betrayal of the Chinese people’s feelings.”

Apple had previously rejected the app, saying that it encouraged illegal activity, specifically allowing users to avoid law enforcement, the developer, who only identifies himself as Kuma, told local media.

After an appeal, however, Apple reversed its decision over the weekend. The app is also available to Android users via the Google Play store.

The developer said the app did not encourage illegal behaviour, but was designed to provide real-time information to help keep the public safe, following four months of increasingly violent pro-democracy protests that have seen about 2,400 people arrested and more than 1,200 injured. Parts of the city have often been cloaked in tear gas as police try to disperse crowds.

Apple, which has a huge presence in the Chinese market, did not respond immediately for comment. Online mainland platforms were brimful of biting criticism for the tech giant, with many calling for a national boycott of its products.

The criticism of Apple follows attacks on the National Basketball Association over a tweet sent by the general manager of the Houston Rockets in support of the Hong Kong protesters. In response, broadcasts of games in China have been cancelled and sponsors have withdrawn support.

The financial hub is still recovering after a weekend that saw widespread vandalism and fierce running battles between police and protesters, after the government invoked emergency powers to ban the wearing of masks in public. Police said 77 people have been arrested so far for wearing masks since the ban came into force on Saturday.

On Wednesday, hundreds of masked protesters gathered outside Hong Kong’s high court shouting “Revolution now!” as prominent activist Edward Leung appeared at a hearing to appeal the six-year sentence he was given last year for his role in a 2016 riot, one of the longest sentences for a protester since the 1997 British handover.

The crowd chanted “Liberate Hong Kong! Revolution of our time”, which has been adopted as the slogan of the current protests but was coined by Leung for his campaign three years ago.

He was one of the first candidates to be barred from running in the elections when the government concluded his pro-independence leanings contravened the city’s charter.

As the city braces for further rounds of violent clashes this weekend, the city’s chief executive, Carrie Lam, said she has not ruled out calling in the support of the Chinese military if the situation spins out of control.