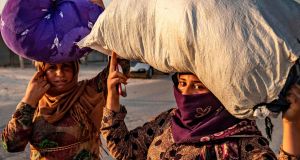 Civilians carry their belongings over their head as they flee amid Turkish bombardment on Syria’s northeastern town of Ras al-Ain in the Hasakeh province along the Turkish border. Photograph: Delil Souleiman/AF 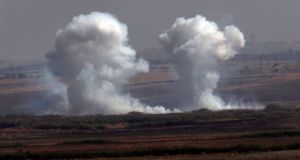 In this photo taken from the Turkish side of the border between Turkey and Syria, in Akcakale, Sanliurfa province, southeastern Turkey, smoke billows from targets inside Syria during bombardment by Turkish forces on Thursday. Photograph:Lefteris Pitarakis/AP

Turkish ground troops have stepped up their offensive against Kurdish forces in north-eastern Syria, seizing villages and continuing an aerial bombardment of Syrian towns close to the border.

The Kurdish Red Crescent, a local humanitarian organisation, said 10 civilians had been killed in the past 24 hours. Children were among the dead and wounded, according to videos and photographs posted on social media by activists.

The SDF, armed and equipped by the US and other western allies to battle Islamic State, the Sunni jihadi group, in north-east Syria, were fighting back against the Turkish advance. Two civilians were killed by rocket and mortar fire from Syria that hit the Turkish border town of Akcakale, according the region’s governor, including a nine-month old baby boy.

The Turkish Armed Forces, together with the Syrian National Army, just launched #OperationPeaceSpring against PKK/YPG and Daesh terrorists in northern Syria. Our mission is to prevent the creation of a terror corridor across our southern border, and to bring peace to the area.

Ankara has said it wants to push Kurdish fighters that it considers terrorists away from its borders and create a safe zone that Syrian refugees in Turkey can return to. But the long-anticipated offensive has sparked an international backlash, amid concerns over the threat to civilians and Kurdish forces – which have helped the international fight against Isis - and fears that the operation could enable the resurgence of the jihadist group.

The Kurds were left even more isolated on Thursday evening, when the Syrian regime in Damascus said it would not start talks with the SDF. Faisal Maqdad, Syria’s foreign minister, said the regime “won’t accept any dialogue or talk with those who had become hostages to foreign forces,” referring to the SDF’s alliance with the US and other western countries.

SDF officials had said they hoped Russia could broker talks with Damascus as they try to find new allies to help shield them from Ankara.

“If they try to describe our operation as an occupation, our work is easy. We’ll open our gates and send you 3.6 million refugees,” Mr Erdogan said in a speech to members of his political party. The EU has called on Turkey to stop the military incursion.

The Turkish operation began days after a pullback by US forces from the border, and senior members of US president Donald Trump’s own Republican Party condemned him for making way for the incursion.

The US decision has been widely criticised as an abandonment of Syrian Kurds.

Mr Trump said on Thursday he was talking to “both sides” as Turkey pressed its offensive, and warned Ankara that it would be hit hard financially if it did not “play by the rules”.

“I am trying to end the ENDLESS WARS. Talking to both sides,” he said on Twitter. “I say hit Turkey very hard financially & with sanctions if they don’t play by the rules! I am watching closely.” – Copyright The Financial Times Limited 2019/Agencies