Q&A: Who are the Kurds and why is Turkey fighting them in Syria?

How does the US fit in to the conflict and will the cross-border assault benefit Isis? 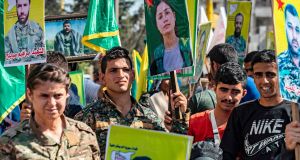 Fighters and veterans from the Kurdish women’s protection units and the people’s protection units marched on Tuesday in front of the UN headquarters in the northern Kurdish Syrian city of Qamishli during a protest against Turkish threats. Photograph: Delil Souleiman/AFP.

Turkish forces began a long-anticipated cross-border assault on Wednesday against the Syrian Democratic Forces (SDF), a Kurdish-led militia, in northeastern Syria. The dispute between Turkey and the Kurds has deep roots in regional power dynamics that have created a tangled web of interests. Further complicating the picture is the fact that the United States is an ally of both Turkey and the SDF, as the militia is known.

President Recep Tayyip Erdogan of Turkey said the goal of the incursion was “to destroy the terror corridor” that he said Kurdish forces were trying to establish on his country’s southern border, and to bring peace to the region. Leaders of the SDF and others in the region say the strikes are putting civilians at risk, and warned of an imminent humanitarian crisis. Kurdish groups on the ground shared photographs and videos of people fleeing villages as smoke rose from the site of strikes.

To understand the current conflict requires knowing the background of the dispute between Turkey and the Kurds, and how the United States fits into the dynamic.

Who are the Kurds?

The Kurds are the fourth-largest ethnic group in the Middle East. Despite their numbers, they are a stateless and often marginalised people whose homeland stretches across Turkey, Iraq, Syria, Iran and Armenia. After the first World War and the fall of the Ottoman Empire, many Kurds pushed for an independent Kurdish state, and promises were made in early treaties for the creation of a Kurdistan. But when the region was eventually divvied up, the nation never materialised. In the years since, numerous attempts at nationhood have been largely quashed.

How does Turkey view the Kurds?

Relations between the Turkish nation and the nationless Kurds have long been fraught. Turkey sees the rising power of Kurdish forces along its southern border as a threat, and Erdogan has for years made pronouncements of plans for a military intervention in the northern Syrian enclave. But in fact, the roots of the dispute extend much further back, and they are intrinsically tied to a domestic conflict in Turkey. Turkey has been in conflict with the Kurdistan Workers’ Party, known as the PKK, since it launched a violent separatist movement in the country in the early 1980s. Both Turkey and the United States consider the PKK a terrorist organisation. Across the border in Syria, an offshoot militia, the Kurdish People’s Protection Units, has been active since 2004. The militia, known as the YPG, has long sought to form an autonomous state for the Kurds. The YPG and an associated militia of female fighters have been applauded by some in the West for their anti-Islamist stance. It has attracted a number of American and European volunteers to fight in its ranks during the battle against the Islamic State.

But the militia members have deep ties to the PKK, the Kurdish group that Turkey considers a terrorist organisation, though its leaders play down the links. Early in Syria’s civil war, the militia had early success in establishing a peaceful enclave they called it Rojava in the north of the country. The militia members eventually joined with other regional groups and grew into the SDF, which was instrumental in wresting large stretches of Syrian territory from the Islamic State (also known as Isis) and ousting Islamic State from its last foothold in Syria earlier this year.

As the SDF wrested back control of towns and cities across northeastern Syria from Islamic State, Kurdish power grew. And as it did, Erdogan increasingly voiced concern.

How does the US fit in?

The Turkish operation against the Kurds in Syria has left Washington stuck between two allies. US president Donald Trump’s announcement this week that he would be pulling troops from the country effectively greenlighted Turkey’s incursion. Erdogan has long advocated a US withdrawal from Syria and has urged Trump to pull his support from the SDF, most recently in a weekend phone call.

The United States and Turkey, which are NATO partners, have long been close allies. But the Kurds and the United States also have a long history of co-operation. The US-led coalition began working with the SDF in 2015, saying the Kurdish-led group was the most capable of pushing back the Islamic State militants who had seized large swaths of territory in Iraq and Syria. This proved to be true. Trump further muddied the United States’ position when, after first voicing support for Erdogan’s plan, he seemed to walk back his statements in the face of objections from political allies and opponents alike. Trump said on Twitter: “We may be in the process of leaving Syria, but in no way have we Abandoned the Kurds, who are special people and wonderful fighters.” In a subsequent message he said that the United States was “helping the Kurds financially” and warned Turkey against unnecessary force.

Could all this benefit Islamic State?

Possibly. The SDF proved a vital force in wresting back control of areas seized by Islamic State militants. It also captured tens of thousands of Islamic State fighters and their families. Those people are now being held in makeshift prisons in the region being targeted by Turkey, and while Trump said he believes Turkey should be responsible for them, there are no plans for their relocation.

While the territory of the Islamic State’s self-declared “caliphate” has been wrested from the group, the security situation in much of Syria remains tenuous. Some fear that destabilising northeastern Syria will create the same power vacuum that existed before the Islamic State’s rise to power, and make way for the group to reemerge. Even now, despite their territorial losses, there is evidence that Islamic State militants are active in Syria, said Melissa Dalton, director of the Cooperative Defense Project at the Center for Strategic and International Studies. With Turkey’s new incursion into the country, she said, the SDF is likely to turn its attention away from its old adversaries. “There is a very high risk of the Islamic State taking advantage of the SDF and the American and other coalition members being focused on the implications of the Turkish efforts,” she said. Dalton said she was also concerned about increased potential for prison breaks and unrest among detainees. “It’s really a recipe for disaster,” she said.–New York Times