US president asked Scott Morrison about origins of Russia investigation 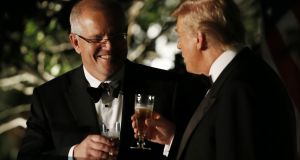 US president Donald Trump recently asked the Australian prime minister and other foreign leaders to help US Attorney General William Barr with an investigation into the origins of the Russia investigation that shadowed his administration for more than two years, the Justice Department said Monday.

Mr Mueller wrapped up his report earlier this year with an inconclusive finding about Mr Trump — the president was not charged with any crimes, but Mr Mueller pointedly said he did not exonerate Mr Trump. The president promptly called for an investigation into the origins of the Mueller inquiry.

The revelation comes amid new scrutiny of Mr Trump’s dealings with foreign leaders. The House opened an impeachment inquiry into Mr Trump that centres on a summertime call in which he pressed for help investigating Democrat Joe Biden.

Mr Morrison’s office said in a statement, “The Australian government has always been ready to assist and cooperate with efforts that help shed further light on the matters under investigation.”

“The PM confirmed this readiness once again in conversation with the president,” the statement said, referring to Mr Morrison.– AP