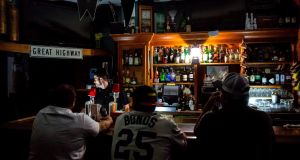 Electricity was shut off to nearly 750,000 California homes and workplaces on Wednesday as Pacific Gas and Electric Co (PG&E) imposed a string of planned power outages of unprecedented scale to reduce wildfire risks posed by extremely windy, dry weather.

The power cut knocked out traffic signals, forced school closures and shut businesses and government offices across northern and central California, said Brian Ferguson, a spokesman for the state Office of Emergency Services.

One key disruption was at the University of California at Berkeley, which canceled classes on Wednesday during the first phase of the “public safety power shutoff”, targeting more than 500,000 homes and businesses.

A second phase began at 3pm Pacific time (11pm Wednesday Irish time) and extended the blackout to 234,000 more customers, said the utility, which was considering a third phase for 4,600 more dwellings and businesses.

Although PG&E said changing weather conditions and work-arounds had restored power to about 44,000 customers, its action was the largest precautionary electricity shutoff undertaken by California’s biggest investor-owned utility.

“It’s too bad that it is such a large area to be turned off,” said Matthew Gallagher, a resident of Vacaville, a town 100 km (60 miles) northeast of San Francisco, where everything, from the Walmart outlet to gasoline service stations, was closed for lack of power.

A similar cutoff was under consideration by neighboring utility Southern California Edison for nearly 174,000 of its customers, about 50,000 of them in Los Angeles County, should severe winds hit southern California on Thursday as forecast, SoCal Edison spokeswoman Taelor Bakewell said.

Some of California’s most devastating wildfires were sparked in recent years by damage to electrical transmission lines from recurring bouts of high winds that then spread the flames through tinder-dry vegetation into populated areas.

“We are entering into a two-three- or four-day period of extreme fire danger in California,” Governor Gavin Newsom said at an event in San Diego on Wednesday.

The California Department of Forestry and Fire Protection (Cal Fire) said “red-flag” warnings were posted across the state for what was shaping up to be the strongest wind event so far this season.

PG&E warned residents to prepare for outages that could last several days. But spokeswoman Kristi Jourdan said it expected to restore supply to most customers within 24 to 48 hours after high winds abate, once power lines were inspected and any damage repaired.–Reuters