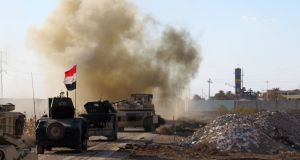 Iraqi pro-government forces drive their armoured vehicles in the Jwaibah area, on the eastern outskirts of Ramadi, on February 8th after they retook the region from Islamic State group jihadists. Photograph: Al-Dulaimi/AFP/Getty Images

Major powers trying to forge a Syrian peace plan have made almost no progress in overcoming one of the main obstacles to ending the war: deciding who is a terrorist – and therefore a legitimate target – and who is not.

Everyone involved in the diplomatic process agrees with the UN’s designation that Islamic State and Jabhat al-Nusra, a group linked to al-Qaeda, are terrorists and therefore barred from the negotiating table.

This is more than simply a hitch for the peace process, under which talks began in Geneva last month only to be suspended almost immediately. Without an agreed list, any warring faction can say its opponents are terrorists and that it is free to keep fighting them.

“This list hasn’t been touched since December,” said a senior European diplomat. “The difficulty we have is that there are hundreds of different groups on the ground, and groups can change names and affiliations every day.”

The UN Security Council unanimously approved a resolution in December endorsing an international plan to end the war. This called for listing of groups in Syria that should or should not be labelled terrorist.

This issue has gained prominence since February 12th, when powers committed to securing a cessation of hostilities amid intense Russian airstrikes in support of forces loyal to Syrian president Bashar al-Assad.

Diplomats from the west, Gulf Arab nations and Turkey argue that compiling such a list was a distraction initiated by Moscow, which says its bombing targets only terrorists, while Assad considers all opposition armed groups fair game.

The International Syria Support Group, a club of global and regional powers backing the UN-led peace effort, tasked Jordan with collecting proposals from members to create a final consensual list. A draft dating from before the December 18th security council meeting shows a jumble of dissenting opinions. It lists 163 factions. – (Reuters)