Over 120 migrants rescued from rafts in the Mediterranean 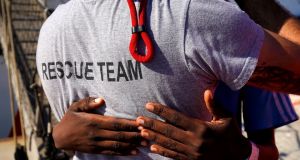 A Spanish charity rescue boat sought safe port on Friday after Italy rejected its request to disembark 124 people saved from two migrant rafts in the Mediterranean, said the organisation.

Non-governmental organisation (NGO) rescue vessels have largely disappeared from the Mediterranean over the last year as governments have tightened controls. Charity ships that have rescued migrants have faced lengthy standoffs in their attempt to disembark those aboard.

Barcelona-based NGO Open Arms rescued 55 people from a sinking raft on Thursday, among them two babies, and a further 69 people from another boat during Thursday night, said the organisation.

Two heavily pregnant women were among those rescued from the second raft, said Open Arms founder Oscar Camps, while many showed signs of violence suffered in Libya before beginning the sea voyage.

“As was to be expected, we have received word from the Italian government. A €50,000 fine and seizure of the Open Arms hangs over us if we enter Italian waters, this in addition to the threats of the Spanish government,” said Open Arms.

The boat was heading north in search of a safe port, added the organisation.

Italian interior minister Matteo Salvini, who heads the far-right League party, is pushing to increase fines for rescue boats and said on Thursday any which enter Italian waters will be seized.

“I would tell them that the government of Spain hopes they will act in accordance with international agreements and international law,” said Isabel Celaa, spokeswoman for the caretaker Socialist government.

The Open Arms was blocked from operating in the Mediterranean earlier this year after Spanish maritime authorities said the NGO had violated international agreements that rescued migrants should be taken to the closest available port.

Spain replaced Italy earlier this year as Europe’s main migrant destination as the western Mediterranean route from Morocco to the Iberian peninsula became the most active in the region.

While numbers of arrivals to the continent overall have fallen consistently in recent years, immigration remains divisive in the European Union, with one poll finding it voters’ key concern ahead of EU elections in May. – (Reuters)