Britain ‘will never be neutral’ on Northern Ireland, says Theresa May 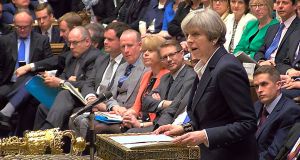 Britain’s prime minister Theresa May said she believed ‘fundamentally’ in the strength of the United Kingdom. Photograph: Parliament TV handout via Reuters

British prime minister Theresa May has said her government “will never be neutral” on the future of Northern Ireland as talk of a referendum on a united Ireland grows.

Ms May said she believed “fundamentally” in the strength of the United Kingdom.

Her comments in Prime Minister’s Questions came amid calls by Sinn Féin for a border poll following the Brexit vote.

In the wake of Ms May’s comments, Labour leader Jeremy Corbyn backed allowing a referendum on the unification of the island of Ireland “if the Northern Ireland Assembly wants to have one”.

In an interview with the BBC’s Andrew Neil, Mr Corbyn said Brexit threw up an “enormous complication” about how to deal with the border with the Republic of Ireland.

Mr Corbyn insisted he was “not in favour” of a second Scottish referendum but Westminster should not block requests from the Scottish Parliament.

Earlier, Danny Kinahan, UUP MP for South Antrim, pressed the government to campaign for Northern Ireland to remain part of the UK.

He said: “May I also congratulate the government on today triggering Article 50, I know this is a momentous action for the whole of the United Kingdom.

“While I, like herself, campaigned to stay in, we recognise that the people have spoken and we offer the Ulster Unionist Party’s full support in ensuring that negotiations deliver the best for the whole of the United Kingdom and particularly for Northern Ireland.

“But could I ask the prime minister to confirm that in the extremely improbable event that a border poll should take place regarding the future of Northern Ireland within the United Kingdom during her premiership, that the government will fully support any official remain campaign?

“Just as the government has done both in regard of the EU and indeed Scotland.”

Ms May replied: “You are absolutely right, today of course we do give effect to the democratic decision of the people of the United Kingdom who voted for us to leave the European Union.

“And it was a call to make the United Kingdom a country that works for everyone, not just the privileged few.

“We are of course, within that, fully committed to ensuring that the unique interests of Northern Ireland are protected and advanced as we establish our negotiating position, and our position has always been clear that we strongly support the Belfast Agreement, including the principle of consent that Northern Ireland’s constitutional position is a matter for the people of Northern Ireland to determine.

“But as our manifesto made clear, we have a preference that Northern Ireland should remain part of the United Kingdom, and we will never be neutral in expressing our support for that.

“And that’s because I believe fundamentally in the strength of our union.”

Ms May also called on rival political parties in Northern Ireland to come together and form an executive so their voice could be heard in Brexit negotiations.

Northern Ireland voted 56 per cent to 44 per cent to remain in the EU in last June’s referendum but the UK as a whole voted to leave.

“The best result to ensure the voice of a devolved administration in Northern Ireland can be heard within these negotiations is for the parties to come together and for us to see that strong and devolved government which will provide us with that interlocutor,” May told parliament after she triggered the formal Brexit process.