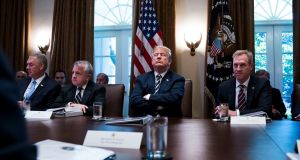 US president Donald Trump has warned of “severe consequences” if Iran restarts its nuclear activity, a day after he announced America’s withdrawal from a landmark nuclear deal.

Speaking ahead of a cabinet meeting in Washington, Mr Trump was asked whether he believed Iran would restart activity in the wake of the United States decision to pull out of the 2015 agreement.

“I would advise Iran not to restart their nuclear programme, I would advise that very strongly. If they do there will be very severe consequences,” he told reporters.

He added that the United States “will be putting on among the strongest sanctions that we’ve ever put on a country. And they’re going into effect very shortly.”

Mr Trump reiterated his view that the deal negotiated by President Barack Obama and five other powers was a “one-sided deal that ultimately was going to lead to nuclear proliferation”.

Noting that Democrats, including Senate minority leader Chuck Schumer, had voted against the 2015 deal, Mr Trump said that he had terminated “a terrible, terrible deal that should have never, ever been made”.

He added: “We’ll see how we do with Iran. Probably, we won’t do very well with them, but that’s OK too. They’ve got to understand life, because I don’t think they do understand life. If you look at what’s happening in the Middle East with Syria, with Yemen, with all of the places they’re involved, it’s bedlam and death. And we can’t allow that to happen.”

The reverberations from the US decision to reimpose sanctions on Iran and withdraw from the nuclear accord were felt across the world on Wednesday, as Iran and the other co-signatories to the deal responded to the announcement.

While the US treasury has granted companies doing business with Iran wind-down periods of 90 and 180 days, there were reports that the European Union is seeking a longer-term exemption from the tariffs. One option open to the EU is a regulation invoked in 1996 which gave European companies legal protection from secondary sanctions imposed by the US on Cuba, Iran and Libya.

Senior European figures insisted on Wednesday that the deal was not dead, despite the US withdrawing from it.

‘No intention of walking away’

British foreign secretary Boris Johnson, who flew to Washington earlier this week to try to convince the United States not to abandon the deal, told the House of Commons that Britain had “no intention of walking away” from the agreement.

European Commission president Jean-Claude Juncker launched a stinging attack on the Trump administration, claiming that the United States “no longer wants to co-operate with other parts in the world”.

“At this point, we have to replace the United States, which as an international actor has lost vigour, and because of it, in the long term, influence.”

1 Tyrone midwife on the cover of Vogue magazine
2 Pubs reopening will not mean ‘fellas having a few pints and peanuts’, Holohan warns
3 ‘White Irish people have never had to think about this’
4 Donald Trump is in trouble, and that could spell very bad news
5 Trump’s claim it was a ‘great day’ for George Floyd is criticised
Real news has value SUBSCRIBE