Boost for Trump as North Korea frees three US citizens 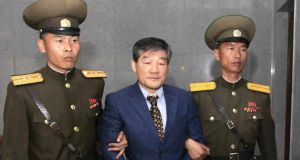 Kim Dong Chul, a US citizen who has been released after his detention in North Korea, being escorted to his trial in Pyongyang, North Korea in April 2016. Photograph: Kim Kwang Hyon/AP

North Korea released three American detainees on Tuesday and handed them over to US secretary of state Mike Pompeo, in a goodwill gesture ahead of a planned summit between Donald Trump and Kim Jong-un.

“I am pleased to inform you that secretary of state Mike Pompeo is in the air and on his way back from North Korea with the three wonderful gentlemen that everyone is looking so forward to meeting. They seem to be in good health,” Mr Trump said in tweet.

The president planned to greet them when they landed at Andrews air force base outside Washington at about 2am local time (7am Irish time) on Thursday morning.

The three US detainees are Korean-American missionary Kim Dong-chul, and teachers Kim Sang-duk and Kim Hak-song. All had been working in North Korea and were accused of “hostile acts against the country and were being held as “prisoners of war”.

“I appreciate Kim Jong-un doing this and allowing them to go,” Mr Trump told reporters at the White House. He also thanked Chinese president Xi Jinping, saying Beijing was “helpful” in securing the men’s freedom, and described pre-summit discussions with North Korea as “serious and positive”.

Mr Trump later confirmed that agreement had been reached on a date and venue for the summit, which is expected to take place in late May or early June, and said details would be announced within a few days.

He said, however, that the meeting would not take place at the heavily fortified demilitarised zone between North and South Korea. He has also previously cited Singapore as another possible site.

As Mr Pompeo returned to his Pyongyang hotel from a 90-minute meeting with Mr Kim, the secretary of state crossed his fingers when asked by reporters if there was good news about the prisoners.

I am pleased to inform you that Secretary of State Mike Pompeo is in the air and on his way back from North Korea with the 3 wonderful gentlemen that everyone is looking so forward to meeting. They seem to be in good health. Also, good meeting with Kim Jong Un. Date & Place set.

Secretary Pompeo and his “guests” will be landing at Andrews Air Force Base at 2:00 A.M. in the morning. I will be there to greet them. Very exciting!

A North Korean official came to the hotel shortly afterwards to inform Mr Pompeo that Mr Kim had granted their release, according to a senior US official present for the exchange. Mr Pompeo replied: “That’s great,” according to the official.

“You should make care that they do not make the same mistakes again,” the North Korean official was quoted as saying. “This was a hard decision.”

They were in the air less than an hour after leaving custody. Asked what his first words were to the freed Americans, Mr Pompeo told reporters on his plane: “Although we’re not quite back home yet, I welcomed them back. They were happy to be with us on this plane, to be sure.”

The White House said the three Americans appeared to be in good condition and all were able to walk without assistance onto the plane.

“For decades, we have been adversaries. Now we are hopeful that we can work together to resolve this conflict, take away threats to the world and make your country have all the opportunities your people so richly deserve,” Mr Pompeo said.

Mr Kim, who is a former spy chief, said: “I have high expectations the United States will play a very big role in establishing peace on the Korean peninsula.”

US defence secretary James Mattis said later on Wednesday that the US troop presence in South Korea would not be part of initial negotiations with North Korea.

Mr Mattis, addressing a Senate hearing, ruled out that the 28,500 US forces in South Korea could be a bargaining chip in those initial discussions between Mr Trump and Mr Kim. “That’s not something that would be on the table in the initial negotiation,” Mr Mattis said, describing the US military forces on the peninsula as a “stabilising presence”.

Mr Li said the countries involved should “seize the opportunity to promote denuclearisation of the Korean peninsula”, according to a report on the official Xinhua news agency reported.

President Xi Jinping and Kim Jong-un held their second meeting in two months earlier this week in the Chinese city of Dalian, during which Mr Kim said he hoped for “phased” and “synchronised” measures to realise denuclearisation and lasting peace on the Korean peninsula.

Mr Trump and Mr Xi subsequently spoke on the telephone about developments.

Mr Abe said his nation would normalise ties with North Korea if the nuclear and missile issues, along with that of the abduction of Japanese citizens, were solved comprehensively.