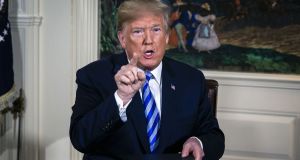 US president Donald Trump as he announced the US withdrawal from the Iran nuclear deal. One of the reasons for Trump’s decision was his commitment to fulfilling a campaign promise. Photograph: Al Drago/Bloomberg

The signs were not good. European allies were not optimistic as they awaited a decision on America’s continued participation in the Iran deal ahead of a May 12th deadline.

In the end, the announcement by Donald Trump from the Diplomatic Room of the White House on Tuesday was much worse than expected. In strident tones, Trump denounced the Iranian regime, excoriated the nuclear deal that his predecessor negotiated and warned that leaving the “defective” deal in place would spark a nuclear arms race in the region.

While there had been hope that the US would choose a “soft option” – lifting the waiver on some sanctions, but not withdrawing from the agreement completely – Trump and his aides were unambiguous about their intention. “We’re out of the deal. We’re out of the deal,” Trump’s national security adviser John Bolton said to reporters after the announcement.

Among the most concerning statements from the president was that Iran was continuing to enrich uranium to produce nuclear weapons. This appears to directly contradict the evidence of International Atomic Energy Agency inspectors, who have said that Iran is in compliance with the deal.

More specifically, it seems to contradict Trump’s own advisers. Just last month, secretary of state Mike Pompeo told Congress there was no evidence to suggest that Iran was not in compliance with the agreement.

Although there has been criticism from opponents of the deal that some nuclear sites have been off-limits, the international inspectors verified that Iran had eliminated 95 per cent of its stockpile of enriched uranium and dismantled two-thirds of its centrifuges used to make nuclear fuel.

The decision may reflect the influence of the recently appointed Bolton and Pompeo. Both are foreign policy hawks who opposed the agreement. Many believe that the real aim of the Trump administration’s decision to abandon the deal is to instigate regime change in Iran – something that Bolton has called for in the past.

While focus will turn now to reaction from Iran – and the possibility of destabilisation in the Middle East – domestic US politics played an important role in the president’s decision. One of the reasons for Trump’s decision to withdraw was his commitment to fulfilling a campaign promise. As he said during his announcement: “When I make promises, I keep them.”

But it is also about keeping the Republican Party in Congress on board. Many Republicans are still smarting from President Barack Obama’s decision not to seek Senate approval for the deal – which is an agreement rather than a treaty – back in 2015.

House speaker Paul Ryan – who along with other senior congressional figures was briefed on the decision by vice-president Mike Pence shortly before the announcement – issued a statement as Trump finished speaking. “The President’s announcement today is a strong statement that we can and must do better,” he said, noting that the Obama-era Iran deal was “deeply flawed”.

One other fallout from the announcement is that Trump’s chance of securing a Nobel Peace Prize – a possibility suggested by South Korean president Moon Jae-in – appears to be fading fast.

As he announced America’s withdrawal from the JCPOA, Trump revealed that Pompeo was on his way to North Korea ahead of the proposed summit between the US president and Kim Jong-un. But the last word from the state department as Pompeo prepared to land was that it was not quite sure who he would be meeting.

That the Trump administration is pulling out of a nuclear agreement only to embark on another is testimony to the contradictions, misunderstandings and foreign policy failures that characterise the Trump presidency.

1 Travel rules unlikely to include mandatory quarantine or cancelled flights
2 California shuts down again as US coronavirus cases surge
3 US passengers fly into Dublin: ‘I’m here for six days. I guess I’ll have to stay inside’
4 Covid-19: 200 to 250 people arriving in Ireland from US daily - Coveney
5 Girl was sexually abused from age six by three older brothers, court told
Real news has value SUBSCRIBE