European leaders have work cut out to save Iran nuclear deal

French president Macron proclaims determination to Iranian president over accord 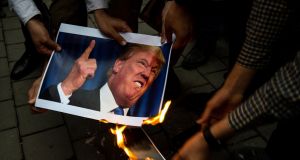 Iranians burn a photograph of US president Donald Trump during an anti-US demonstration outside the former American embassy HQ in Tehran, on Wednesday. Photograph: Ali Mohammadi/Bloomberg

From the moment that US president Donald Trump announced his renunciation of the Iran nuclear accord on Tuesday night, European leaders proclaimed their determination to save it.

“The accord is not dead,” the French foreign minister and several advisers to President Emmanuel Macron insisted on Wednesday. In a telephone call to Iranian president Hassan Rouhani, Macron expressed “the will of France to continue to carry out the nuclear accord in full”, the Élysée said.

Macron took the lead in trying to persuade Trump not to renounce the accord. He has positioned himself as middleman between all the parties, and now leads the effort to save it. He provided the impetus behind a joint statement with British prime minister Theresa May and German chancellor Angela Merkel on Tuesday night, and will discuss the crisis further with Merkel in Germany on Thursday. He will talk to Russian president Vladimir Putin about it in Russia later this month.

“The Russians and Chinese have already said they are staying in the accord, so there is convergence between the five other signatories, that is to say the three Europeans and the two other permanent members of the [UN] Security Council, ” notes an adviser to Macron.

Saving the accord would mean ensuring that Iran benefits economically from it, and that Iran continues to submit to intrusive inspections to ensure it is not developing nuclear weapons.

Before a joint session of Congress on April 25th, Macron spoke of “four pillars”: the present nuclear accord; a new agreement regarding follow-on arrangements from 2025; negotiations on Iran’s ballistic missile programme and Iranian influence in Iraq, Syria, Yemen and Lebanon.

Macron’s desire to broaden the accord “only made sense if the US respected the existing agreement”, Robert Malley, who was US president Barack Obama’s Middle East adviser and a negotiator of the accord, wrote in Le Monde. Yet Macron brought up the “three pillars”with Rouhani again on Wednesday. “It’s no longer a question of persuading the US not to leave, but of persuading Iran to stay,” Malley added.

A presidential adviser admitted that Iran had been “very defensive” about Macron’s proposal for further negotiations, but said Iranian officials have been “open-minded” and “constructive” in recent exchanges.

After Trump’s announcement, Rouhani said, “the US never fulfils its commitments”, but that the accord “will stay in force if, with the co-operation of the other five countries, the interests of the Iranian people are ensured”. Otherwise, he warned, Iran will resume unlimited enrichment of uranium, signalling the end of the agreement.

Iran has so far attracted a tiny fraction of the foreign investment it hoped to reap from the accord. If European companies are deterred by Trump’s threat of the most severe economic sanctions ever against the Islamic Republic, the economy will wither, and the accord with it.

“Obviously, we will do everything to defend our companies, as Europeans, and we will do it with the US administration,” a presidential adviser says. Washington has given European companies between 90 and 180 days to withdraw from Iran.

“I think the accord is already dead, despite the determination of the other five signatories,” says Alexandre Ebtedaei, a Franco-Iranian lawyer at the FTPA law firm, responsible for advising European and Iranian companies. “From the moment the US re-establishes the sanctions they had prior to the nuclear accord, any European company with investments or subsidiaries in the US can be punished for disobeying the US law banning trade with Iran.”

European companies will bear in mind the precedent of BNP Paribas bank. In 2014, the US imposed a €7.3 billion fine – the largest in US history – on the French bank over allegations that it broke trade sanctions against Sudan, Iran and Cuba.

The US Office of Foreign Assets Control could establish precise rules and a specific range of punishments, or it could act arbitrarily, as it has in the past

Not only will direct trade be penalised. “Anyone who uses equipment with the tiniest US component will be at risk,” Ebtedaei continues. “Nothing can be guaranteed 100 per cent free of US components.”

Richard Grenell, Trump’s new ambassador to Berlin, warned German companies via Twitter to get out of Iran “immediately”. For the time being, the extent of US sanctions remains uncertain. The US Office of Foreign Assets Control could establish precise rules and a specific range of punishments, or it could act arbitrarily, as it has in the past.

“It’s a question of risk management,” Ebtedaei concludes. Bluster about defying the US and defending European companies is one thing. But when it comes down to it, he predicts, “Companies will have a hard time justifying trade with Iran before their boards and shareholders.”