Iran’s hardliners reinvigorated by US exit from nuclear deal 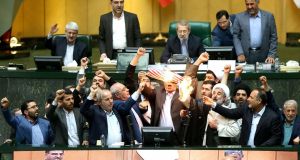 Iranian MPs burn a US flag in the parliament in Tehran following US president Donald Trump’s decision to withdraw from the nuclear accord. Photograph: AFP

US president Donald Trump’s decision to pull out of the 2015 nuclear deal with Iran has undermined reformist president Hassan Rouhani and reinvigorated the hardline opposition.

As the chief sponsor of the deal, Mr Rouhani vowed to continue abiding by the agreement but warned Tehran could resume uranium enrichment if the full range of punitive sanctions are reimposed. He pledged to negotiate with Europe with the aim of reducing the impact of unilaterally-imposed US restrictions on oil exports, banking and trade, which could be reactivated within 90-180 days.

Mr Rouhani’s main concerns are Iran’s faltering economy and providing jobs and goods for the country’s 80 million people. Before sanctions eased in 2016-17, the economy had shrunk, inflation and unemployment soared, and Iran could not import essential medical supplies and spare parts for its aging oil production facilities and commercial aircraft fleet.

Although Washington violated the spirit of the nuclear deal under both the Obama and Trump administrations by using US domination of the international financial system, Iran’s economy achieved a positive growth rate due to the easing of sanctions which permitted the country to double oil revenues and increase imports.

During negotiations over the accord and following its adoption, Mr Rouhani faced fierce opposition from hardline conservatives. He prevailed only because he had the support of supreme leader Ayatollah Ali Khamenei and the majority of Iranians who seek an end to sanctions, economic stagnation, and normal relations with the international community.

Thanks to Mr Trump, protests over unemployment and low salaries which erupted early this year could resume. Washington sees the protest movement as a means of effecting regime change.

Mr Khamenei has adopted an I-told-you-so attitude, castigating Mr Rouhani for negotiating with the US and saying Iran would withdraw from the deal unless the EU guarantees to defy US sanctions. Hardline parliamentary speaker Ali Larijani said Mr Trump does not have the “mental capacity” to manage important issues and called for the resumption of the nuclear programme.

Armed forces chief of staff Gen Mohamed Baqeri condemned the US for refusing to “stand by its signature” on the accord. Iran’s media is divided between backers and critics of Mr Rouhani.

By adopting a tough line against Iran, Trump has given Israel a free hand to strike Iran’s military posts in Syria

Consequently, if supporters of the deal in Europe and Asia fail to preserve Iran’s gains from the deal and allow sanctions to undermine economic recovery, Mr Khamenei, the hardliners and the public are likely to turn against Mr Rouhani, who could be compelled to restart large-scale uranium enrichment and other activities halted under the deal.

Iran can retaliate by ordering loyalist Shia militias to strike US troops in Iraq and Syria, intervening covertly in Afghanistan where the US is losing the war against the Taliban, and providing major strategic aid to rebels fighting US-backed Saudi forces in Yemen. So far, Iran has provided political support and limited arms aid.

Mr Trump’s pull-out has divided regional powers, with Saudi Arabia and its acolytes – the United Arab Emirates and Bahrain – and Israel congratulating Mr Trump, while Turkey, Iraq and Syria have condemned him. As US allies and beneficiaries of Saudi largesse, Jordan and Egypt have expressed concern.

Saudi Arabia stands to benefit both politically and financially from the US withdrawal from the nuclear deal. Riyadh will continue to command a leading role in the region while Iran could be, once again, sanctioned and isolated. The Saudis have vowed to work with oil producers and consumers to mitigate “the effects of any supply shortages” due to reduced Iranian oil exports. This means Saudi Arabia could increase exports and revenues at a time when the kingdom has been suffering from financial constraints.

By adopting a tough line against Iran, Mr Trump has given Israel a free hand to strike Iran’s military posts and personnel in Syria and encouraged Saudi Arabia to step up its campaign against Yemen’s rebels.

Instead of winding down, the war in Syria is likely to ramp up, with Israel and Saudi and US proxies targeting the Syrian army and Iranian-supported paramilitaries – risking retaliation from Tehran, prompting Moscow to expand its military deployment to ensure the survival of Syria’s government, and hastening the transformation of the struggle for Syria into a new east-west conflict.

Tehran’s resumption of uranium enrichment could also result in a nuclear arms race between Iran and Saudi Arabia, according to Saudi crown prince Mohamed bin Salman, although Jordan’s foreign minister Ayman Safadi has warned this would destabilise the region and the world.