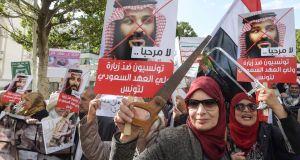 Tunisian women hold up saws and signs showing pictures of Saudi Crown Prince Mohammed bin Salman with a caption below reading in Arabic “no welcome, Tunisians against the visit of the Saudi Crown Prince to Tunisia”, during an anti-Saudi Crown Prince protest in the capital, Tunis on November 27th Photograph: Fethi Belaid/ AFP/Getty

The heir to the Saudi throne, Mohammed bin Salman, arrived in Tunisia on Tuesday on his tour of “brother” Arab countries before he braves western, Turkish, Chinese and Russian leaders at the G20 summit in Argentina.

Tunisia is the fourth stop on his first foreign tour since the widely condemned murder of Saudi dissident and Washington Post columnist Jamal Khashoggi on October 2nd at the Saudi consulate in Istanbul. The crown prince was warmly welcomed by Tunisian president Beji Caid Essebsi.

The president’s office said Tunisia condemns the murder of Khashoggi and calls for a full investigation but does not want to see Saudi Arabia destabilised. Tunisia, like many Arab countries, has long benefitted from Saudi largesse.

Despite the Khashoggi affair and repeated demands for the extradition of ousted president Zine al-Abidine Ben Ali, who remains a fugitive in Saudi Arabia, Tunisia held joint exercises with the Saudi air force last month.

Tunisia was the sole country to emerge from the 2011 Arab Spring as a democracy in which citizens enjoy freedom of expression, but there is a sharp disconnect between its leaders and its people over the Saudi crown prince. Tunisian lawyers filed for a court order to bar his visit.

A dozen civil society organisations claimed the tour was intended to cleanse the crown prince’s image and ignore “flagrant human rights violations and suppression of freedom of speech” in Saudi Arabia.

Mounted on the wall of the Tunisian journalists’ syndicate is a vast banner depicting the prince holding a chainsaw, representing the gruesome dismemberment of Khashoggi that Turkey claims took place. Syndicate president Naji Baghouri said the “blood of Khashoggi is not yet cold and the murder bin Salman is not welcome in Tunisia”. Tunisians consider themselves the voice of Arabs not permitted to protest by authoritarian leaders.

Prince Mohammed began his tour in the Emirates with consultations with Abu Dhabi crown prince Mohamed bin Zayed, his partner in the Yemen war. The crown prince flew to Bahrain, where Saudi troops have protected Sunni rulers from the Shia majority demanding political rights.

The Saudi prince’s third stop was Cairo, where he was greeted at the airport by Egyptian president Abdel Fattah al-Sisi, whose country has received billions of dollars since 2011 from Saudi Arabia to rescue its economy and currency from collapse.

Journalists and activists opposed the visit.

From Tunisia, the prince is set to go to Algeria and Mauritania before flying to Buenos Aires, where judicial authorities, at the instigation of Human Rights Watch, have begun to investigate him for war crimes in Yemen and Khashoggi’s murder.

Argentina’s constitution provides for universal jurisdiction for war crimes and torture, granting the country’s judiciary the right to prosecute these crimes wherever they were committed.

Human Rights Watch director Kenneth Roth said the summit could “make the Argentine courts an avenue of redress for victims of abuse unable to seek justice in Yemen or Saudi Arabia.”