Released academic Matthew Hedges back in the UK 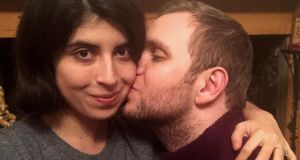 Matthew Hedges and his wife, Daniela Tejada, reunited in northern England on Tuesday. The PhD student was granted a presidential pardon and flown back to Britain earlier in the day. Photograph: Daniela Tejada/EPA

A British academic sentenced to life imprisonment by the United Arab Emirates for spying and then pardoned by the nation’s president days later thanked his wife and everyone who helped “securing my release” as he landed back in the UK.

Matthew Hedges was freed on Monday after a high-profile battle with the Gulf state ally, but officials persisted in calling him an MI6 spy – a claim denied by family and colleagues.

In his first statement issued after landing at Heathrow airport on Tuesday morning, Mr Hedges praised his “brave and strong” wife Daniela Tejada, saying “seeing her and my family after this ordeal is the best thing that could have happened”.

The Durham University PhD student, originally from Exeter, was sentenced on Wednesday after being arrested at Dubai airport as he tried to leave on May 5th.

“I don’t know where to begin with thanking people for securing my release,” Mr Hedges said.

“I have not seen or read much of what has been written over the past few days but Dani tells me the support has been incredible. Thank you so much to the British embassy and the FCO [Foreign Office] for their efforts in ensuring I arrived safely back home.

“I could not have done this without Daniela. I hear her face is everywhere!

“She is so brave and strong. Seeing her and my family after this ordeal is the best thing that could have happened. I thank you all once again, this is very surreal.”

His wife mounted a campaign to free the 31-year-old and foreign secretary Jeremy Hunt personally discussed the case with UAE leaders.

“I am so happy to have my Matt home,” she said.

“Thank you once again for the overwhelming support we have received, especially from the embassy in the UAE and the foreign office in ensuring that Matt was safely returned home. We are overjoyed and exhausted!

“I hope you can all understand that Matt and I, as well as his family, really need some time to process everything that we have been through. No one should ever have to go through what he did and it will take him time to heal and recover. He is very overwhelmed.

“To say we are happy is an understatement.”

Earlier, she said news of the pardon brought her family’s “nightmare” to an end, and Mr Hunt described it as “fantastic”.

At a news conference on Monday in Abu Dhabi, officials showed a video of Mr Hedges describing himself as a captain in MI6 during what appeared to be a court hearing.

However, MI6 – the foreign intelligence service – is not known to use military ranks.

An official told reporters in Abu Dhabi that Mr Hedges was “100 per cent a full-time secret service operative” who was in the country “to steal the UAE’s sensitive security national secrets for his paymasters”.

He said the pardon came in response to a letter from Mr Hedges’ family appealing for clemency and due to the historical close ties between the UK and the UAE.

“His highness has decided to include Mr Matthew Hedges among the 785 prisoners released,” he said.

“Mr Hedges will be permitted to leave the country once all the formalities are complete.”

The UK takes a “neither confirm nor deny” approach to allegations of intelligence service membership, but Mr Hunt has previously said he has seen “absolutely no evidence” to suggest Mr Hedges is a spy. – PA